Trending
You are at:Home»Vices»Drink of the Week: The Morning Glory Fizz 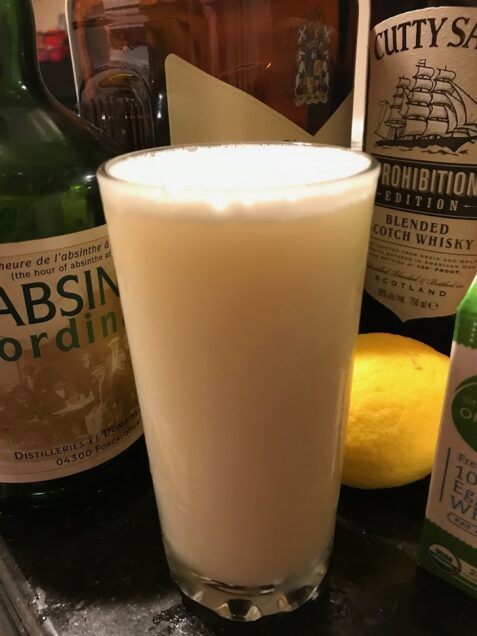 The are numerous classic era drinks with completely different recipes going by the name of Morning Glory. Fortunately for everyone’s sanity, however, the Morning Glory Fizz sticks to a fairly manageable group of ingredients: Scotch whisky, lemon juice (sometimes mixed with equal parts lime juice), sweetener, a minuscule amount of absinthe and, crucially, egg white to make it all palatable and refreshing. Lest life be too simple, however, the proportions of those ingredients are also all over the place. I think it means that this is a pretty sturdy cocktail with a fair amount of room for adjustment.

There seems to be a great deal of agreement that the Morning Glory Fizz comes to us from some time prior to 1880 or so. In those days, habitually over-imbibing seems to have been a lot more common than it is today and this is one of a huge number of cocktails that began their life as morning hangover remedies or pickmeups (never mind that alcohol is a depressant). This fizz appears in a number of books by the big names in cocktails past and present but is often credited to bartender Harry Johnson.

With my version of his drink, I decided to keep things simple and juicy.

Combine all of the ingredients except the soda water in a cocktail shaker without ice. Give it a dry shake to emulsify the egg white…and watch out for a possible mess-causing miniature explosion caused by the albumin in egg white. Next, add plenty of ice and vigorously shake for as long as you can take it. Strain into a chilled highball glass — many would suggest it be on the smaller side. Top off with chilled soda water. You may want to wait an additional moment for the egg white cap to form on top. You won’t see it in the picture above, but if you put in a couple of ounces of soda in a somewhat larger glass, you can get a very appealing large white head that’s separate from the juice/booze —  but your drink will be a tad thinner. Go with your instincts.

Most people stick with a basic blended type of Scotch for the Morning Glory Fizz, and that worked for me. I started simple with Ballantines, which was tasty in several different versions. I’m sure that other inexpensive but quite good brands such as The Famous Grouse or Dewar’s would be fine, though some once swore by Chivas Regal. Monkey Shoulder is another popular brand for this drink, and I suspect its tongue-friendly mellow spiciness would be a hit. If only I had some on hand. (Hint, hint, Monkey Shoulder reps!)

The additional smokiness of the Johnny Walker Black I actually used was an interesting twist. However, I think my best version featured Cutty Sark’s Prohibition. I’m sure there must be a number of others, but this is the only 100 proof Scotch I’ve come across and it’s also a bit sweeter than most. Good stuff.

One last thought. Unless you have a really good brand of absinthe around that you personally enjoy — I’m not sure such a thing exists for me — definitely resist the temptation to go beyond 1/4 of a teaspoon. Even at 1/2 teaspoon, the anise flavor takes over, so you’d better like it!