Trending
You are at:Home»Vices»Drink of the Week: The Orange Gin Fizz 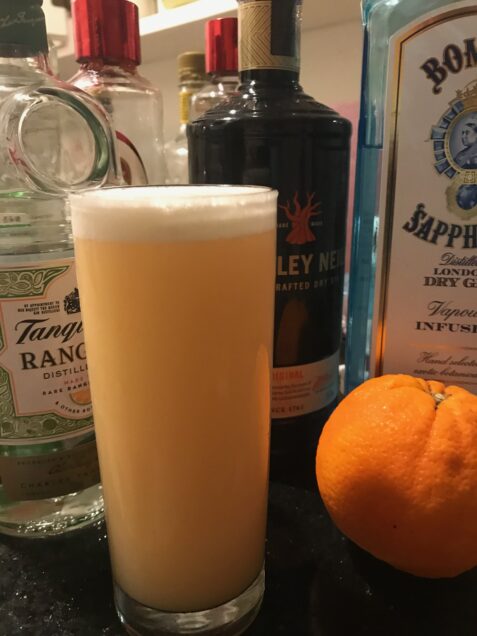 In my opinion, a mixed drink has to work a little extra hard to be refreshing. Alcohol is a pretty powerful diuretic that doesn’t even feel thirst quenching — at least not to me — and no sane person downs shots or martinis to quench actual thirst anyhow — the opinions of movie pirates and cowboys notwithstanding. Beers, ciders, and mixed drinks are a different story but even they can make a guy feel thirsty and tired after drinking them. Kind of the opposite of refreshing.

Last week’s end of summer sour employed lots of juice and not that much alcohol for a tasty and invigorating combo. But, as I continue my late summer series of thirst quencers, the greater challenge is the drink that employs a lot of booze and is still refreshing. I like tiki drinks but all that sweetness isn’t really fooling my body.

This is why I’ve become a fan of fizzes, which employ frothy egg white and cold soda, and it’s a combination that really works for me. Today’s drink,  which some wise soul posted over at Epicurious, is very booze forward tastewise. I also wouldn’t suggest drinking even just one and immediately operating heavy machinery but it’s a startingly appropriate venue for a really high quality gin and, yes, I feel less thirsty  after I’ve had one.

Combine all the ingredients in a cocktail shaker without ice and “dry shake” it to make sure the egg white is emulsified. Add ice, shake very vigorously for as long as you can stand it, and strain into a chilled highball or Collins glass. Be mindful that a larger glass means more soda water for additional dilution/refreshment.

When making this drink I want to stress the importance of two things. The first is chilling the soda water and, if all possible, chilling the glass as well. Remember, there’s no ice in your actual glass. The second is to be selective in your choice of gin. This is more gin-forward in taste than you might assume. Something very simple like Gordon’s, which I actually like to use a lot, doesn’t work at all for me here.

It was the gins with some character to them that floated my boat on the Orange Fin Fizz. Tanqueray Rangpur, with its heavy citrus notes, was very nice. Nicer still, however, was Bombay Saphire. The smoothly boosted botanicals was almost luscious with the fresh OJ and the milkiness from the  emulsified egg white. Finally, Whitley Neill, which I was introduced to a couple of weeks back, was something of a revelation. The strong floral and bitter notes made for a real thinking person’s refresher…and who wants a dumb mixed drink? Don’t answer.