Trending
You are at:Home»Vices»Drink of the Week: The Preakness Cocktail 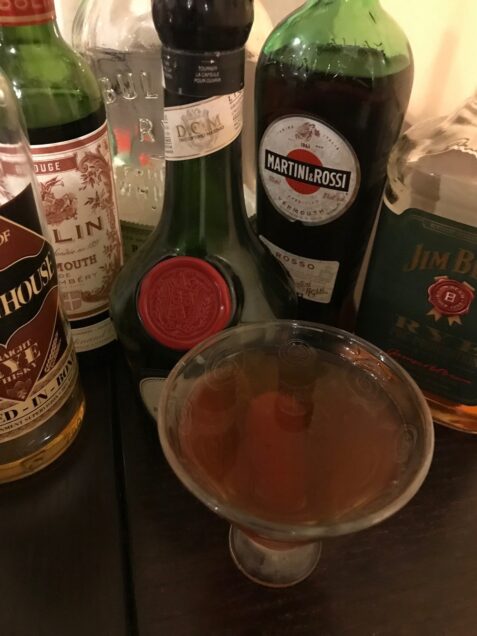 There’s a sad — but not as sad as many other things — reason why I chose a drink this week that celebrates the second race in the horseracing triple crown held at a Maryland racetrack. However, I decided it was better to just give you a drink rather than give you a reason to drink. Suffice it to say that the Preakness is yet another very nice variation on a Manhattan that’s just different enough to refresh one’s interest in that cocktail warhorse. Let’s mess around no further.

Combine all the liquid ingredients in a mixing glass or cocktail shaker with lots of ice. Stir very vigorously for maybe 15 or 20 seconds and strain into a chilled cocktail glass. Add your lemon twist and sip. Instead of suggesting something to contemplate this week, I’m instead going to ask you not to contemplate anything. Simply be the drink and practice dipsomaniac mindfulness. You’ve probably thought enough recently.

The obvious difference between this and a Manhattan is the inclusion of Benedictine, the hazelnut flavor liqueur brought to us by some apparently not too ascetic monks. They’re French, so of course. At just half a teaspoon, it brings a touch of richness that I quite enjoyed.

As for your cocktail brands, I think you can really save your money with this one — the Benedictine is pricey enough — and go with some good but value priced name brands. By far my favorite was also the first, in which I used Jim Beam Rye and Martini & Rossi Rosso. Even though it’s only 80 proof, Jim Beam rye is rather sharp flavored with a fair amount of boozy heat. On the other hand, Martin’s sweet vermouth is a little more complex with an almost leathery aftertaste that might seem to be more bug than feature to some. Here, I think it’s a feature.

Using higher-end products was fine, but not necessarily preferable. Rittenhouse Rye, which is 100 proof and not for the extremely timid, was pretty good. The very popular and very smooth premium brand, Bulleit Rye, was kind of flat as was the Dolin Sweet Vermouth, which is very good and sells for a little more than double the price of Martini and its competitor, Noilly Pratt. Not many of us are getting richer these days.