Trending
You are at:Home»Vices»Drink of the Week: The Dandy 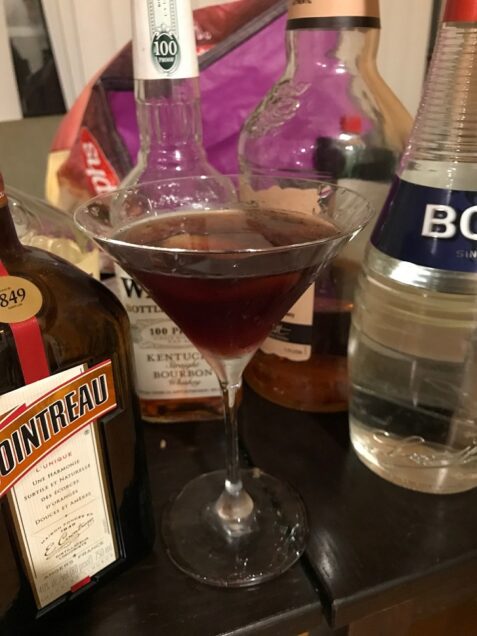 I’m back from my one-week off and completing my tasty trio of Dubonnet cocktails. Today, we have a drink that’s only mildly obscure. It’s featured in The Savoy Cocktail Book and a gazillion websites, but still a new one to me.

Modern day bartenders like to futz with the recipe to a greater or lesser extent. Even such classicists as Erik Ellestad will go so far to substitute the Dubonnet out, and the recipe I’m using diverges a little from the Savoy recipe as it uses bourbon instead of rye and allows for triple sec as well as Cointreau, and rather more of it at that.

Combine the liquid ingreidents in a cocktail shaker with lots of ice. Stir very vigorously and strain into a chilled cocktail glass. Sip. Whatever you feel like contemplating this week as do that sipping is probably just dandy.

*****
This is a drink that I think might be especially good for people who really, really love their Manhattans but want to find a few new ways to change it up. I personally prefer the sweetness of bourbon, but many of the original recipes call for rye, and going with 100 proof Rittenhouse Rye yields the kind of sturdy before-dinner drink that will get you quickly but moderately liquored up without getting in the way of the dinner ahead with a strong boozy flavor many cocktailians will appreciate.

As for bourbons, while 100 proof Evan Williams Bottled in Bond was both sweet and sharp, I was a bit more partial to the more mellow sweetness of 90 proof Maker’s Mark and the less sweet user-friendlyness of 80 proof Four Roses.

Almost as important is your choice of triple sec. Cointreau is considered the class of the field and is specifically called for in a lot of recipes. However, it brings in some additional bitterness that might be too much of a good thing for many of us and, to be honest, I’ve yet to fall in love with the stuff. I had good luck using Bols, still a quality product for my money. I would not turn my nose up at any not-disgusting value priced product in such a small amounts. Hiram Walker and DeKuyper have their place and it might be in the Dandy.