Trending
You are at:Home»Vices»Drink of the Week: The Bennett 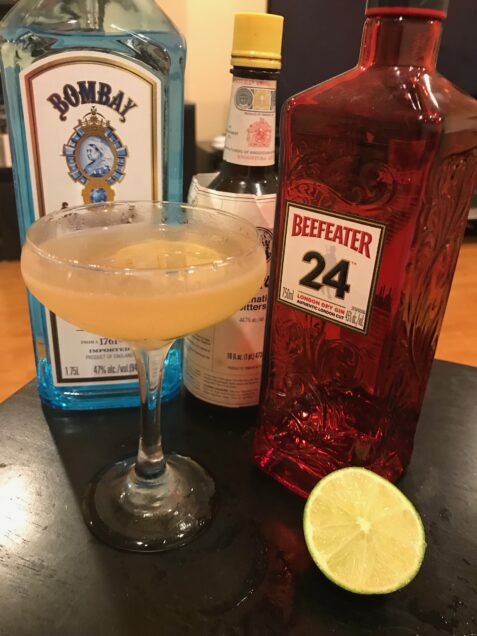 A while back I took a fresh look at the Gimlet using real lime juice and sweetener instead of the more traditional and very sweet Rose’s Lime Juice. Today’s selection is essentially the same drink plus bitters and I think it’s probably better for it. Bitter flavors are to cocktails as bass is to music, and a sound ground floor improves a lot of drinks.

The Bennett reportedly comes from 1922’s Cocktails: How to Mix Them, which I’m only just now purchasing. We are told that it’s named for a Chilean millionaire with a not particularly Chilean sounding name, though it’s said to be quite popular in the Latin American nation. I see no reason at all why it should not be more popular here.

You can definitely adjust the ingredients to suit your tastes and, looking at the recipes I’ve found online, preferences vary pretty widely. I’m going to give you two options, both good in their own ways, though the second is the one I really love; it’s also more jam-packed with vitamin C, for those of you concerned about scurvy.

Combine all the ingredients except the garnish in a cocktail shaker. Shake very vigorously and strain into a cocktail glass. Add the lime wheel if you’re doing that.

Preparation is almost the same as above. The crucial exception is that you need to double strain the drink, i.e., hold a fine kitchen strainer under the cocktail strainer to filter out the pulp. This might seem like an overly fussy step, but it’s not only to make the drink less cloudy. It actually smooths out the more sour flavors and makes for maybe one of the best cocktails I’ve had in a while.

I only came around to the second version, which one app website credits to famed cocktail revivalist bartender Gary Regan, just as I was finishing my research. Frankly, it looked too severe for me. I also felt that only using half an ounce of simple syrup instead of three quarters was plenty balanced enough. Still, I must hand it to the legendary Gaz Regan, removing the extra pulp balances the Bennett out pretty perfectly. More casual drinkers may well prefer the first version, though I still lean towards using less of the lime and sweetener .

Both versions of the Bennett are delightful with a range of gins. I didn’t have a chance to try the Regan version with my now empty bottle of Tanqueray, but it really let the beauty of Bombay Sapphire’s multiple favors through while being quite accessible. It was also quite kind to another new favorite of mine, Beefeater 24, which to my tastebuds is somehow both more mellow and more complex than regular Beefeater.

I really can’t imagine the Bennett not working with any decent gin, including a basic one like Gordon’s. However, especially if you’re making the Regan recipe, probably the more you like your gin, the more you’ll like your drink.