Trending
You are at:Home»Vices»Drink of the Week: The Cowboy Shandy 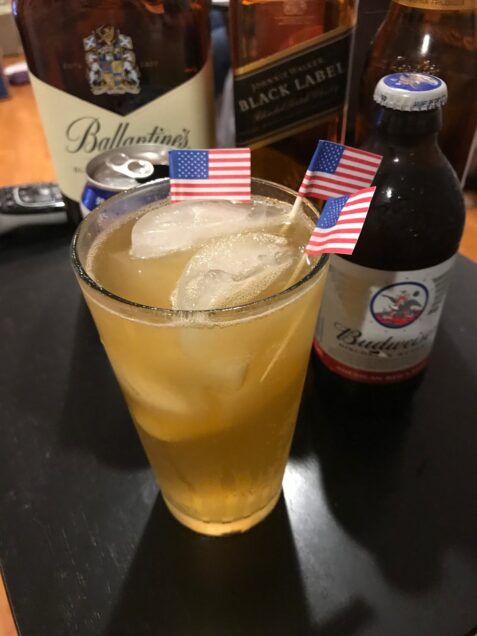 For the luckier among us, we’re on the cusp of a four day July 4th weekend. This is a year when anyone who bothers to care will have at least a few contradictory feelings regarding the birthday of our great and greatly messed up nation. Still, it’s going to be hot in most of the United States and, with all the horrible crap that’s going on, we’re going to need to at least try and relax. Moreover, what could possibly be more purely and innocently American than lemonade and a lager-type beer?

Well, since nothing is ever that simple, shandies turn out to be more of a European and, dare I say it, English kind of a thing, as per the Wikipedians.  It gets worse because today’s drink throws in some actual liquor and was apparently created to be used with High West’s Campfire Whiskey blend, though mixologist Tristan Willey allowed that using Scotch was also acceptable. Alas, though the Campfire Whiskey might sound a lot more cowboy than a purely Scottish brew, it’s selling for $70+ here in Southern California. Ain’t no cowboy can afford to pay that kind of money only to dilute it with 9 ounces of beer and lemonade!

That being said, no matter where the whisky comes from, this would truly be a dandy drink to sip while downing hot dogs, watching some fireworks, and trying to remember the good stuff about the USA.

Combine the Scotch, lemon juice, and syrup in a cocktail shaker with plenty of ice. Shake very vigorously and strain into a pint beer glass with some ice — but not too much. Top with the lager — watch out for excess suds — gently stir, and add the lemon twist. Sip and remember that, as Ben Franklin famously kinda sorta said, it’s our republic, if we can keep it.

As befits a simple drink, this one seems to work best with simple but good brands. Dewars and Ballantine’s both provided very tasty results. When I decided to head just a few miles uptown with Johnny Walker Black, the smokier/peatier flavor tended to get in the way. As for beers, the Apollo 11 special edition red lager put out by Budweiser pictured above was just fine, though I wasn’t prepared for the red hue. A more straightforward but high quality lager which is hidden in this picture, Ballast Point, played just the right role. Switching from simple syrup to honey syrup, on the other hand, added a welcome bit of richness to the affair.

And now for some pre-Independence Day American music from a fellow LA-born er, globalist, and some friends.