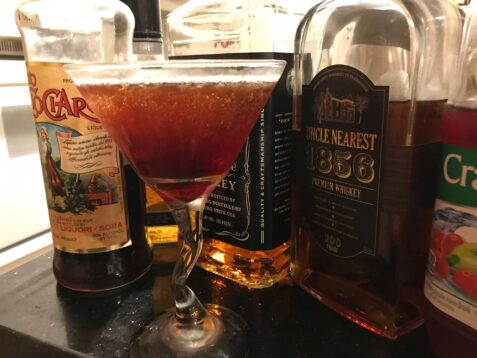 “Nashville” comes as close as any movie has to encompassing the often dark heart of Americanism, and there’s certainly no way to boil this massive work down into any kind of a cocktail. You could make a stunt out of it and use 25 ingredients, one for every important character in Robert Altman’s 1975 tragicomic provocation. Nah. I have a day job; a simple drink with a strong, bittersweet flavor is the best I can do.

I’m not a top-5 kind of a person, but Robert Altman’s “Nashville” is in a select category of great movies that I find progressively more engrossing and more emotional on each viewing. (I could name you four others, but then I’d have to kill you.) Released in 1975, it’s a day-in-the-life of Music City USA as seen through a very particular, very caustic but not quite cynical prism.

It was a time when country music was commercially enormous but still retained some its essence as the music of America’s rural have-nots. Still, while “Nashville” is not quite the bitter-anti-yokel satirical attack people took it as, it’s pretty obviously a microcosm for our nation at the tail end of both Vietnam and Watergate, as various strands of show business, really bad journalism, populism, and power politics come together for horrific outcomes and wonderful music. It doesn’t exactly have a cast of thousands, but it’s one of the biggest movies ever made.

As for the drink, the Nashville Sunset is a somewhere between a twisted Manhattan and a tequila sunrise. I tried for a 70s vibe but with a more modern craft cocktail touch as well to make it as up to date as most Altman films still feel, in their ways. I’m also featuring Tennessee whiskey for more than geographic reasons, as we see a great deal of a certain uber-ubiquitous brand throughout Altman’s panoramic tragicomedy. More about that later but, suffice it to say, you may think Jack Daniel’s is bourbon, but it ain’t.

*****
Jack Daniel’s is the most popular whiskey in the United States, but most people don’t know anything about it other than that it’s good on the rocks or with a Coke and they usually assume its bourbon. To be fair, Tennessee whiskey is reasonably similar to bourbon, using corn and aging the spirit in oak, but it also involves something called the Lincoln County process. We will discuss that in more depth next week but it appears to have coinvented by Jack Daniel and his African-American mentor, Uncle Nearest. It mellows the brew in a way that’s obviously proven quite successful. At the higher end, it can be pretty fantastic.

It took me some time to get this recipe down as I spent a lot of time on blind alleys trying to get the visual and taste effect I wanted. Since tomatoes are, believe it or not, the state fruit of Tennessee, I tried making the first ever sweet cocktail with tomato juice…maybe some other time. I settled instead on Ocean Spray’s Cran-Apple because it’s refreshing but also crassly sweet enough for the 1970s, and what could be more American? The completely Italian amaro was to bring up the bitterness which any drink inspired by an Altman film would require. (I briefly considering going all-in with Fernet.) Finally, the pomegranate was to create the nightfall effect I was going for, and the sweet-tart flavor of the juice finishes the drink nicely.

I finally hit the right proportions when I was using the premium Gentleman Jack, which I have to say was terrific — well balanced smoothly drinkable for all it’s bittersweetness. Still, the Nashville Sunset is just fine with plain old Jack Daniels. It’s also spectacular with an outstanding new brand named for Daniel’s teacher, Uncle Nearest, who had been lost to history until fairly recently. It’s superb stuff – definitely the best Tennessee whiskey I’ve had personally. More on that next week.

And now, let’s consider an American classic that you can’t drink, but one I hope you can swallow.