Trending
You are at:Home»Vices»Drink of the Week: Night World – TCM Fest Salute #3 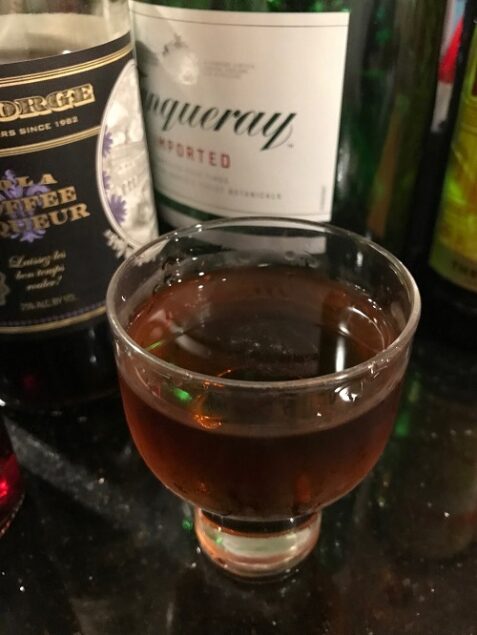 As I continue my liquid salute to the 2019 TCM Classic Film Festival, we’re in the second half of a Mae Clarke double bill. An actress with a natural and easy charm, her entire career unjustly defined by a few seconds of film in which Jimmy Cagney’s tough guy gangster in “The Public Enemy” shoves half a grapefruit in her face. Show business is, of course, the toughest of rackets, and I may never learn why, after headlining beautifully in last week’s “Waterloo Bridge” and co-starring in “Frankenstein,” the citrus attack was literally the headline in her obituary when she passed on in 1982. As far as I can tell, very little else has been written about her, save for a 1996 oral autobiography, now out of print, naturally.

Last week, Clarke was a down-on-her-luck chorus girl turned sex worker who nearly gets saved by romance with an innocent young soldier. In “NIght World,” she plays a gainfully employed and rather sensible chorus girl who may or may not save drunken young millionaire Lew Ayres from a tragic past during a night when practically everyone in one Manhattan nightclub is having a rendezvous with destiny.

Running at a chipper 58 minutes length — yes, a second feature could be barely an hour in 1932 — the film also reteams Clarke with her monstrous “Frankenstein” costar, Boris Karloff,  cast gloriously against type as “Happy” MacDonald, a glad-handing gangster with an unfaithful wife and plenty of competition in business as well. Just to add to the fun, we also have choreography by lunatic genius Busby Berkeley and soon to be movie gangster superstar George Raft repeats the oft-parodied coin-flipping  trick he had just done in Howard Hawks’ original 1931 “Scarface.” It’s a lively melange and so I’ve tried to come up with an after-dinner twist on a Manhattan that can fuel an additional hour or two of fun in the night world.

Combine the liquid ingredients in a cocktail shaker or mixing glass. Stir or shake vigorously and strain into a chilled cocktail glass. Be prepared for a night that may not end as soon as you’d like it to.

I will admit I never quite got Night World, the cocktail, where I wanted it to be, but I’ve definitely made worse actual prohibition era drinks. Frankly, I just feel like this thing needs some diary but then it would be more like Afternoon World or Morning in Las Vegas or something. Night World needs to be tough as well as sweet, and that much I’ve managed. It’s a drink that announces its alcoholic nature alongside the caffeine sweetness. I liked it well enough, but what will you think?

My first tries were mixed at best. I started out using Old Tom Gin, a sweeter take on gin that’s somewhere between the London dry style we all know and the more malty-whiskeyesque genever that started the whole herb-infused liquor thing out in the Netherlands. The only old Tom version that worked used St. George NOLA Coffee Liqueur, easily the best coffee liqueur I’ve ever enjoyed (also the most expensive) Its bite and complexity helped save the drink, but I wanted a drink that didn’t call for a specific brand. So, I decided to pass on the old Tom and go to my trusty bottle of Tanqueray instead and it was generally much better. I’m sure most brands that aren’t excessively strong on the botanical flavors should work.

Kahlua, of course, is the biggest name brand in the coffee liqueur space, and it is probably in the vast majority of the White Russian’s made worldwide, give or take Tia Maria. It’s also the sweetest of the liqueurs I used, so you may want to dial it back or reduce the amount of creme de cacao if you use that. Grind Espresso Shot is a newer product that’s somewhere in between and is actually cheaper than Kahlua, making it something of a steal. It was a bit better, I think.

It seems appropriate right now that I quote my favorite line from “Night World,” which approaches one of the often unspoken truths of prohibition. When Mae Clarke’s boy-man friend offers her a shot of bootleg hooch from his ever-present flask, she demurs. “‘I’m trying to live long enough to see good liquor come back.” Liquor was bad and often dangerous during prohibition. Although most of us have treated it more like a drug than a beverage more often that we might care to admit, there’s something sad about forgetting this stuff has some flavor and can taste wonderful if treated correctly. Prohibition, in many respects, was the start of a slow decline in the quality of cocktails which hit its nadir just around the time I was starting to drink as a teenager in the late 1970s. More on that next week.

Now, if you’re curious about whether lovebirds Mae Clarke and Lew Ayres get out alive from their night world, you can watch the whole thing right now.