Trending
You are at:Home»Vices»Drink of the Week: All Through the Night – TCM 2019 Salute #1 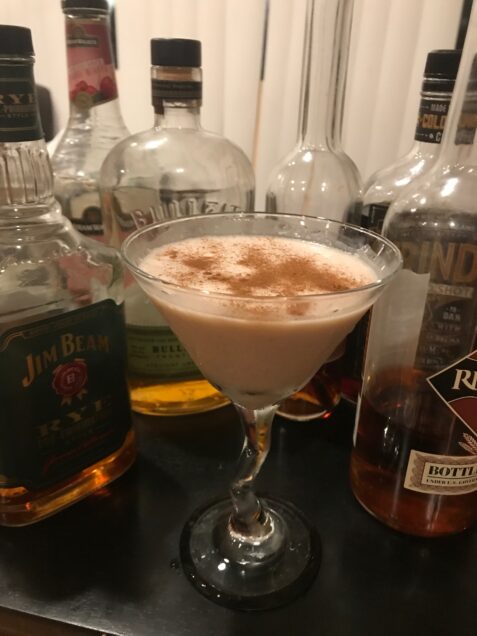 DOTW is back after an unexpectedly long break with the start of our annual four beverage salute to the most dipso-appropriate films I caught at this year’s TCM Classic Film Festival. This was the event’s tenth anniversary and I’m happy to say that I’ve been at every one. For I believe the  ninth time, I’ll be doing my best to come up with four half-way drinkable beverages I can pair with some remarkable movies.

Directed by underrated classic-era journeyman Vincent Sherman, “All Through the Night” is regarded by many as a something of a forgotten classic. It’s definitely a lot of fun as a black-comedy thriller and of some historical interest being one of the small number of anti-Nazi films made prior to Pearl Harbor.

Humphrey Bogart, just on the verge of his superstardom, stars as a benign yet-feared “gambler’ (i.e., gangster) whose penchant for cheesecake — the literal kind that comes on a plate — puts him at loggerheads with a nest of Nazi spies. Bad guys include both Peter Lorre and Conrad Veidt who would both shortly bedevil Bogey in “Casablanca.” Less harmful US henchmen include William Demarest, who raised grumpiness to an art form in film after film, and two future legends of mid-century comedy, Phil Silvers and Jackie Gleason. Of course, there has to be a dame who may or may not be on the level, and here she’s played by real-life German refugee Kaaren Verne. Also, Bogart’s gangster-with-a-heart-of-gold has a mom who ties the whole story together, played by another classic-era acting treasure, Jane Darwell. (Ma Joad from “The Grapes of Wrath.”)

It’s all in good fun and, as an attempt to get American audiences to be alert to the ongoing catastrophe in Europe, which was apparently the problem. The very knowledgeable Michael Schlesinger noted in his introduction that “All Through the Night” was released shortly after the start of the war and, by then, audiences were not ready to laugh at the Nazis who, for all anyone knew, might soon be occupying the Capitol Building. Now, of course, the Nazis have been defeated (well, for a while), and the TCM Fest audience ate “All Through the Night” up like first-rate European pastry.

Early on, Bogey orders a double Martini…delivered in a glass that, to modern eyes, looks scarcely large enough for the olive….and our possible femme fatale orders a sherry, but I chose not to mess around with those. Instead, All Through the Night, the cocktail, joins the whiskey most favored by classic-era movie cowboys, cops, and wise guys with a rather tough German brandy, a bit of sweet caffeine, and an attempted cheesecake simulacrum. It’s an odd mixture, but so is the movie. I and my sweets-loving in-house guinea pig thought it was dandy.

All Through the Night

Combined all ingredients in a cocktail shaker with plenty of ice. Shake very vigorously and strain into a large, chilled cocktail glass. Sprinkle a little bit of extra cinnamon on top as a garnish. Sip and get ready for a long evening.

My recipe began with a trip to the Google machine to see if anyone else had attempted a cheesecake-esque cocktail. Of course, they had. I noted that a couple of drinks were using buttermilk and another was going with kefir to get that essential cheese sharpness. Using buttermilk proved to be something of a disaster. I couldn’t stop thinking of ranch dressing. Plain full-fat kefir on it’s own wasn’t too far off.

To soften it, I added some condensed milk. It’s possible that this would work even better with cream, but my choice worked quite well enough with the rich and sweet flavors I was favoring. Though it’s not essential, I was going with 3/4 of an ounce of demerara syrup instead of the sugar or simple syrup. (Regular sweetener is fine, but if I can make this stuff in a few minutes, so can you.) It all worked nicely enough that I see no reason that a bit of kefir and condensed milk or cream can’t become the basis for slightly more heart and tummy friendly alternatives to Brandy/Gin/Whiskey Alexanders.

As for the actual booze, while premium hard-liquors like Rittenhouse and Bulleit Rye and Schladerer Kirschwasser might have improved the flavor in ways to subtle for my tongue to fully grasp, I really have to say that using more down-market ingredients worked about as well. Jim Beam Rye and Hiram Walker “imitation cherry brandy” Kirsch, which I can’t quite recommend on its own, did little damage to the overall flavor. My coffee liqueurs were Kahlua and a much newer and very reasonably priced number called Grind Espresso Shot. They were both dandy, with the latter arguably making the drink a tad sweeter.

One choice that will make an important difference is whether to use Allspice Dram or vanilla extract. The St. Elizabeth potion I used is strong on the cloves and other wintery spices and did not coexist peacefully with the vanilla extract So, the choice is between a fairly simple and sweeter flavor we get with just a touch of vanilla, or the much more spicy sweetness of the dram. It’s just a question of whether or not you want to play it safe — a choice not open to heroic gangsters and fascist spies.