Trending
You are at:Home»Vices»Drink of the Week: The Bullshot 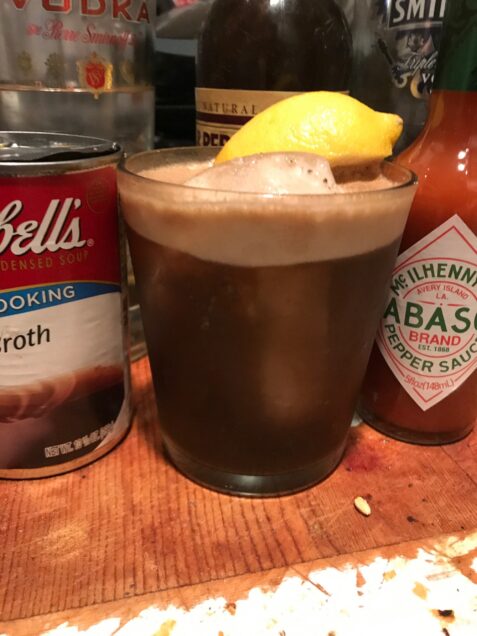 Cocktail historian David Wondrich informed us in 2011 that today’s drink is an invention from the early 1950s, popularized by theater legends, movie stars, haute couture fashion models, trendsetting columnists and the like. He also told how it disappeared sometime in the early 1980s. I was already alive and drinking by then, and it was certainly not a feature at the bars in Westwood Village where my fellow Bruins and I would commiserate with <shudder> Long Island Ice Teas. By the time I read about it a decade or so later, it was a curiosity….but it was a curiosity I’ve always been curious about.

Then a week or two back an old school friend posted an article on a one-off brisket whiskey on my Facebook page. My first reaction was something like horror — I can imagine marinating brisket in whiskey, but reversing the idea and curing whiskey with meat seemed gross, even to an inveterate meat-loving omnivore like myself. And then I remembered the Bullshot and that seemed pretty civilized by comparison. Lower in fat, anyway. It was time to give it a try.

Combine the ingredients in a cocktail shaker and shake vigorously. Strain over fresh ice into a double rocks glass or a large size highball/collins glass with fresh ice. Sip and either enjoy the meaty boozy refreshment as I did or be disgusted and contemplate meatless Mondays through Sundays.

It the Bullshot sounds gross to you, my hunch is it will taste gross to you. My skeptical in-house guinea pig definitely had his skepticism confirmed after a swig. However, if you find the idea kind of intriguing, then it’s definitely worth a (bull) shot. The drink is basically a variation of a Bloody Mary but lighter, more refreshing and less salty. I would even suggest that, while the taste is not to be compared with a really excellent Bloody Mary, it’s likely a superior hair-of-the-dog simply because it contains more liquid and less salt. For me, at least, it’s also a superior way to actually get a bit tipsy. I love Bloody Marys in most of its countless iterations,  but all that tomato juice seems to slow my absorption of alcohol to the point where I wonder if I should just order the thing virgin. The Bullshot, however, is so lightly drinkable and refreshing, I can knock back two or three quite quickly and get a delightful buzz on. That’s not something I usually do, by the way. I should probably add here that I’ve increased the amount of booze by half an ounce. So, if you want even more beef and less of the biting dog, it’s definitely an option.

Moving on to our ingredients, I used Smirnoff, Smirnoff 100 proof, and 8 Neighbors. As usual, any decent vodka brand will get you similar results. However, I have to insist on condensed beef broth. Campbell’s is the traditional choice, but if you can find another condensed brand at your super, no reason not to give it a try. Uncondensed broths can definitely work okay if you’re building it in the glass rather than shaking it, but even then there’s just a beefy punch that was lacking in comparison with the adjusted Wondrich recipe above. For the Bullshot, I say go big beef or go elsewhere — which I’m sure most of you would be okay with.