Trending
You are at:Home»Vices»Drink of the Week: The Swoosh Cocktail 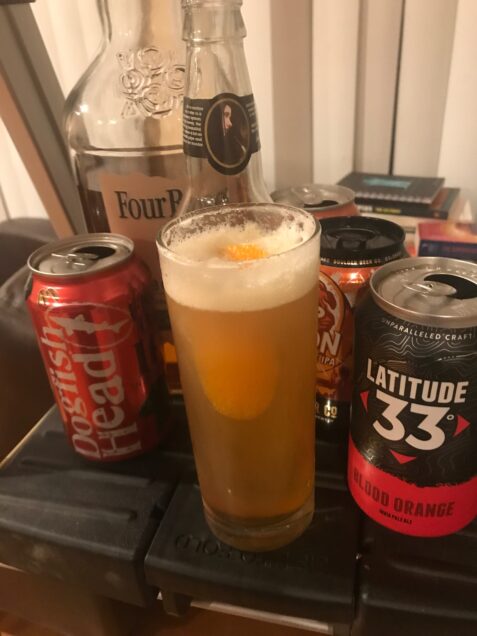 As if you didn’t know, the Saturday after this post goes live is the day of the final four games of this year’s NCAA basketball tournament prior to the championship game on Monday night. On the other hand, if I weren’t writing this post, it’s more than likely that I wouldn’t know that.

I’m not a sports fan, though at times I have been less indifferent to basketball than some of the other games. My interest in March Madness peaked a little a million years ago when my alma mater of UCLA made its way to victory, but it was nothing compared to the many Bruins in my social network, who seemed to spend weeks afterward basking in the victory. One spent more time talking about that than a major award he’d actually earned himself through the sweat of his very own brow. Maybe it was a case of modesty or maybe the success of a bunch of very tall strangers was more exciting if they were UCLA-associated.

While I might be mostly immune, the people at Four Roses bourbon nevertheless feel your hoops-induced psychosis. In its honor, they have come up with a very tasty entry in a genre that I’d like to see a lot more of — beer-based cocktails. The Swoosh is a  simple but clever pairing of citrusy brew and whiskey, far more easy on the tastebuds and tonsils than any Boilermaker.

Pour six ounces of ice cold blood orange beer (or cider, if you like) in a well-chilled Tom Collins/highball glass. Combine the other liquid ingredients in a cocktail shaker with lots of ice and shake very vigorously. Strain into the glass — foam will remain despite the hard liquor onslaught. Add the twist, sip and think of…basketball, I guess?

******
A word about our featured brand, one of the finest booze values out there, actually. Four Roses is a fine quality straight bourbon with a history going back to the mid 19th century. Tragically, the name was sullied when it was pulled from the American market for several decades starting in the 1960s and was replaced by a super-cheap brand that few drank by choice. The real stuff finally returned to United States shelves after the turn of the 21st century, and it’s something of a classic. Solid, tasty and unfussy. 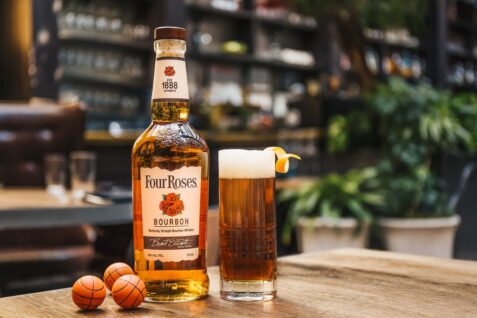 One reviewer compares Four Roses to the little black dress — and all occasion bourbon that is likely to work in just about any context you can think of. It makes a comfortable, lightly sweet Old Fashioned, that’s for sure. It’s also quite reasonably priced. Very coincidentally, I had actually picked up the ginormous bottle pictured at the top of this post for just over $30.00 on sale at my neighborhood booze big box, just prior to being contacted by a mysterious benefactor. You might not find that good a deal, but it’s usually around $20.00 for a standard size bottle here in California. Very hard to beat considering the quality.

The same can definitely be said about the Swoosh Cocktail, which is very approachable without being too sweet. Speaking of sweet, for this drink I took the unusual (for me) step of actually making demerara syrup. It’s really just a matter of buying demerara sugar, now available from C&H, and putting it together with an equal amount of near-boiling water for a couple of minutes and stirring. (So-called raw or turbinado sugar will probably be about as good.) It adds a lovely undertone of richness but, if you’re not into, it’s just fine with just plain simple syrup. Superfine sugar might also work, though I didn’t try that.

As for the beers, I had the Swoosh with Dogfish Head Flesh & Blood IPA, Pulp Fusion Blood Orange, and Latitude 33 Blood Orange Pale Ale. The last one was my favorite of the on-recipe choices. I’m quite fond of pale ales and I enjoyed what seemed to me a lighter, crisper flavor. I also had good luck going off the reservation a little with Uintas Grapefruit Hop Nosh IPA; a good argument can be made that a bit of added tangy bitterness makes for a fuller beverage. I also tried skipping the yeast and hops entirely with Space Blood Orange Craft Cider. It’s a nicely dry beverage that I might be drinking more on its own, and it worked just fine here. It was definitely the favorite of my in-house guinea pig, who has something against beer. Whether or not you’re a beer hating weirdo like him, it’s worth trying also.