Trending
You are at:Home»Vices»Drink of the Week: The Proper Irish No. 12 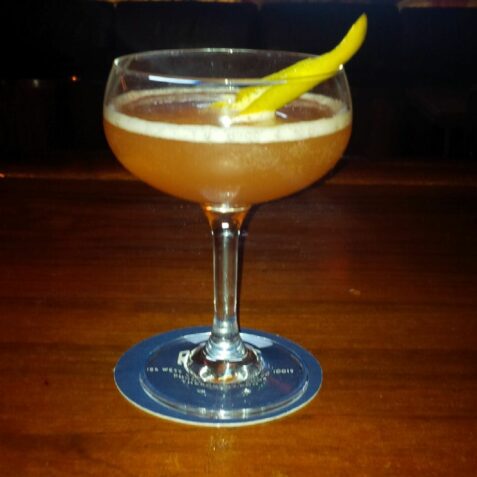 Timing, my friends, is everything. Well, no, but it’s definitely a thing. This week’s refreshment is presented by Proper No. Twelve Irish Whiskey. This is for the simple reason that its representatives were nice enough to send me a free bottle of the stuff along with this week’s recipe and, of course, I always like to do Irish whiskey cocktails before St. Patrick’s Day because Irish whiskey is good and why not? So, that’s one kind of timing,  but this week there’s more.

Proper No. Twelve is a whiskey that’s associated with MMA star Conor “Notorious” McGregor. He is, I gather, best known for fighting mostly retired boxer Floyd Mayweather back in 2017. I’m guessing he earned the nickname via a history of extracurricular pugilism. Sports ignoramus that I am, I innocently Googled Mr. McGregor the night I started writing this post. It turns out that the evening before, he had been arrested for allegedly snatching and then busting an onlooker’s cell phone in Miami.

Now, in the current climate, this is relatively mild celebrity misbehavior. Still, I’m going to out on a limb here and say it was probably an overreaction to whatever the cell phone owner was doing. I should add, however, that we’re told that, for every bottle of McGregor’s whiskey that’s sold, $5.00 will go to charities helping first responders in need. That’s a blow for the good guys.

As for the whiskey, it’s on the aggressive side itself. There’s a bit more heat to it than the Bushmills which some reviewers are associating it with, but it has sweet aroma with caramel and vanilla notes to it, along with the harsher flavors. In any case, my critical faculties are much more acute when it comes to mixed drinks than spirits on their own. I can say that today’s cocktail is a pleasantly clenched fist of a drink inside a leather glove of sweet citrusy flavors.

Combine the ingredients in a cocktail shaker. If you’re using straight honey instead of honey syrup, make sure you dissolve it in the room temperature booze first, but it’s best to make a small amount of syrup, and it’s super easy. Add lots of ice to the mixture, shake very vigorously for as long as you can stand, and strain into chilled cocktail glass. Add the orange twist if you’ve got it. Sip and contemplate whatever sweet science you’re personally into.

******
The Proper Irish is the kind of good quality drink I often tend to associate with very boozy candy. The better tiki drinks usually fall into this category, but with its large portion of bitters, it’s a bit more balanced and obviously non-exotic in flavor. The taste of the whiskey is still there, fortunately, but between the honey and the orange liqueur, it’s a heavily cushioned. Indeed, someone could be forgiven if they assumed there was less booze than their actually is — and there’s quite a lot. If you’re not driving and your blood sugar is in good shape, The Proper Irish could be for you.

That being said, I should add that, during one go-round I accidentally cut the honey syrup portion in half. It was still sweet, but more spiky in a way that some of you might enjoy.