Trending
You are at:Home»Vices»Drink of the Week: The Tequila Sour 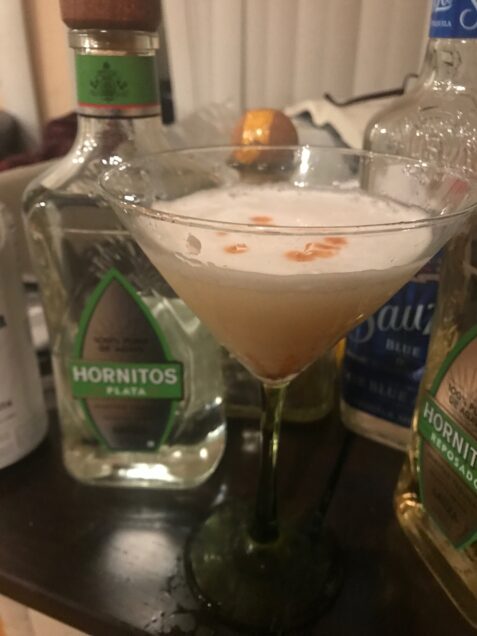 After my recent adventures with the Gimlet and the Gimlet Eye, I still had plenty of limes and egg white around. I looked around online and found a number of recipes for a drink that was so simple and just plain logical, it just had to be this week’s choice. This one is my version of a number of recipes that all boil down to a Pisco Sour made with tequila, which really isn’t very different from last week’s creation. I do think it’s better in terms of mass appeal, however. Why isn’t this drink everywhere?

Combine all of the ingredients except the bitters in a cocktail shaker. Dry shake without ice to emulsify the egg white. Add lots of ice, and shake very vigorously. Strain into a chilled cocktail glass. Wait a minute for the foam to solidify on top of the drink and add a few drops of chocolate or aromatic bitters to the top a garnish/flavor enhancer. Sip and feel sorry for our American and European cocktail forbears who were ignorant of the joys of one of the world’s greatest base spirits.

I have to say every iteration I tried with a variety of tequilas, each drink was very much it’s own thing and your choice of booze and juice will make a significant difference. The good news is that all of them were good. The very best of the bunch was using the best tequila of the bunch, Patron Añejo. With lime juice it was a complex treat but, for whatever reason, lemon juice really set it alight with sweet and spicy notes I find hard to describe other than to say it was delightful. It’s not always the best brand that makes the best cocktail, but that definitely applied in this case.

Using lime juice, Hornitos Reposado was a bit more on the tangy sour side while my in-house guinea pig was most taken with the Hornitos Blanco version, arguing that it was one of those sneaky drinks that could get people blasted while barely noticing the alcohol, though my tongue not so fooled. Lemon juice with Sauza 100% Blue Agave — and expression that seems to have been supplanted by their Blue Silver brand — provided an interesting funky agave aftertaste that some may dig and other might prefer to ignore.

Your choice of bitters will also matter. I would have probably loved the Fee Brothers Aztec Chocolate Bitters most if I hadn’t just gotten off a solid week of using the stuff as a garnish on another drink. I really dug both Fee Brothers’ Old Fashioned aromatic bitters as well as Angostura, which is not just the most popular aromatic bitters, it just might be the best. That cola-like taste of spice, vanilla and blackness — I have no other words — is very nice on the tongue when laying atop egg white.