Trending
You are at:Home»Vices»Drink of the Week: The Puritan’s Loophole (a toddy) 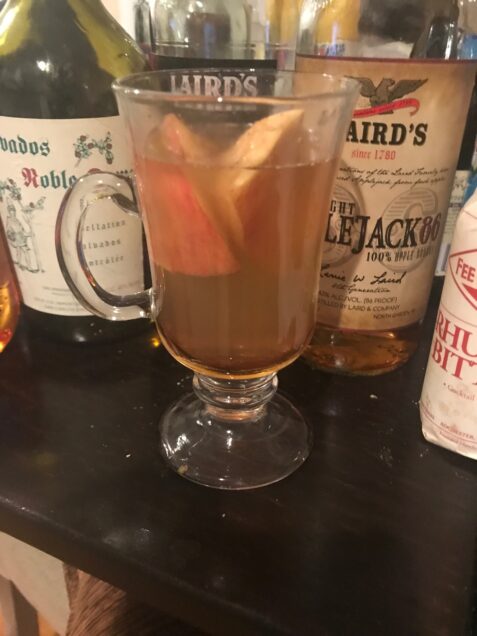 I’m starting to think I just dreamed this, since I can’t find a word about it online now that I need it, but here we go.

I could have sworn that Michael Pollan, or some other historian of things that go into our bodies, has said that the ubiquity of hard apple cider and apple brandy (aka applejack) in the earliest days of America was partly fueled by a religious loophole. Though we all grew up with the idea of Eve eating the forbidden apple in the Garden of Eden, no apples actually appear in the Holy Bible. And so, the story goes, that our Biblical literalist forbears noticed that, while there are many injunctions against overdoing the fermented fruit of the vine in scripture, there is no reference to apple cider or apple brandy. Thus, some early American Christians felt a bit more comfortable chugging products made from apples, since they hadn’t received specific orders regarding from the Almighty.

Great story but, as of right now, it seems to have disappeared from the Internet and I have to admit that it has the ring of the apocryphal. Nevertheless, I need a name for this week’s drink, which I came up with after being unhappy with some of the apple brandy toddy recipes I found online.

The Puritan’s Loophole (a toddy)

Slice some apples and produce your 1/2 ounce of very fresh apple juice. Set aside one or two of the spent apple slices. Pour four ounces of boiling water,into a preferably prewarmed coffee cup or glass mug. Alternatively, you can boil the water in the mug, which will heat it up maybe more than you even want — at least if you’re like me and prefer not to scald your tongue.

Next, add the agave syrup, rhubarb bitters, and apple brandy. Your chosen spirit can be one of the American types made from by the Laird company. You can also use French calvados if you want to add a morally suspect European touch to your warm cocktail. Finally, add a sprinkling of ground cinnamon to your spent apple slices and toss them into your mug. Stir and sip. Contemplate why it was that apples became the forbidden fruit and not something else. “‘Eat not of the Cumquat of Forbidden Knowledge,’ sayeth the Lord God Jehovah to Eve, for it is kind of sour and a lot more trouble than it is worth.””

The Puritan’s Loophole didn’t come easy. I started with a drink someone else came up comprised of hot water, apple brandy, lemon juice, and honey syrup, which I simplified to honey. I found that toddy lacking; the sourness of the lemon juice just seemed to get in the way, even if I doubled the honey or switched to agave, which disperses more easily in fluid.

I finally got the idea to switch to juice made from the usual lemon to juice from one of the lovely Fuji and Gala apples we’re fortunate to have access to here in SoCal right now. I also added some bitters to keep things from getting too insipid. But choosing the right bitters turned out to be a thing. Angostura harshed the sweet mellow more than I wanted. Peychaud’s didn’t get in the way as much, but then I finally realized that the fruitiness of rhubarb bitters would be a better complement. That was true, but then I also realized that everything apple flavored is better with cinnamon. There we had the crucial touch which pushed this toddy over the top.

I mainly used Laird’s 100 proof straight apple brandy and Calvados Roble Dame, which is great stuff for the money. As you might expect, the Laird’s was possibly a bit much. Ditching the American exceptionalism with the smoother, yet nicely complex, brandy de pommes made for an unambigously delicious drink.