Trending
You are at:Home»Vices»Drink of the Week: The Santa Claus Sour 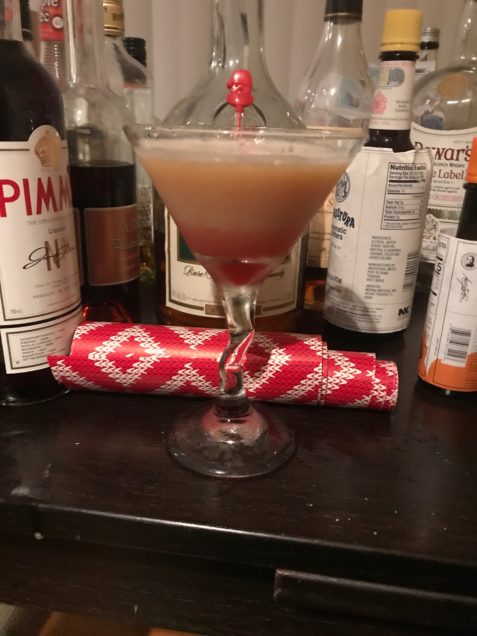 Yes, Christmas is just about here and, probably like some of you, I’m trying to avoid growing to Orson Welles-like proportions by maybe dropping a few pounds before the food really hits the fan this coming week. Of course, when you have a drink blog and feel compelled to create a Christmas-themed drink, this is kind of challenging. If I did as I’d really like to and go with something with maybe some heavy cream and whole egg, I’d be bloated long before Saint Nick arrives.

Which brings me to my search for a drink that, while probably not actually low-calorie, would still not send you to the endocrinologist, the cardiac ward, or the fat farm on December 26. It started with a concoction called the Santa Claus that I found on the Absolut web site. The ingredients – cognac/brandy, orange curacao, and Pimm’s #1 didn’t seem too Xmasy to me but they were also more or less within the realm of caloric reason and, hey, the name! I tried the Santa once and was underwhelmed, but I was willing to give it a go a second time with a higher end, drier curacao. I was overwhelmed with how freaking godawful it was.

It was time to make a few adjustments. Of course, I made it more fattening.

Combine all of the ingredients except the grenadine or raspberry syrup in a cocktail shaker without ice. Dry shake without ice, an essential step if you’re using egg white straight from the egg. Next, add lots of ice and shake vigorously for at least 10-15 seconds. Strain into a large chilled martini-style cocktail glass. Finally, add two teaspoons of your choice of red, sweet syrup to the drink. It will flow to the bottom and suggest an inverted Saint Nicholas hat. Sip, working your way to the sweet bottom like the chocolate inside a Tootsie Roll. Consider the body-positive role model who breaks into houses worldwide every 25th of December.

I tried this with my default not-quite-Cognac, Reynal, and a decent lower priced actual Cognac, Maison Rouge. However, as happens so often, it’s not so much the  base spirit that’s decisive here in terms of flavor. I originally experimented with various amaros in place of the Pimm’s #1, but the extra sweetness they added was overpowering.

So, I went back to Pimm’s. It got a lot better, however,  when I forgot to use the bitters at all the overly sour flavor that was gone.  Yes, Virginia, there is a totally drinkable Santa Claus cocktail.