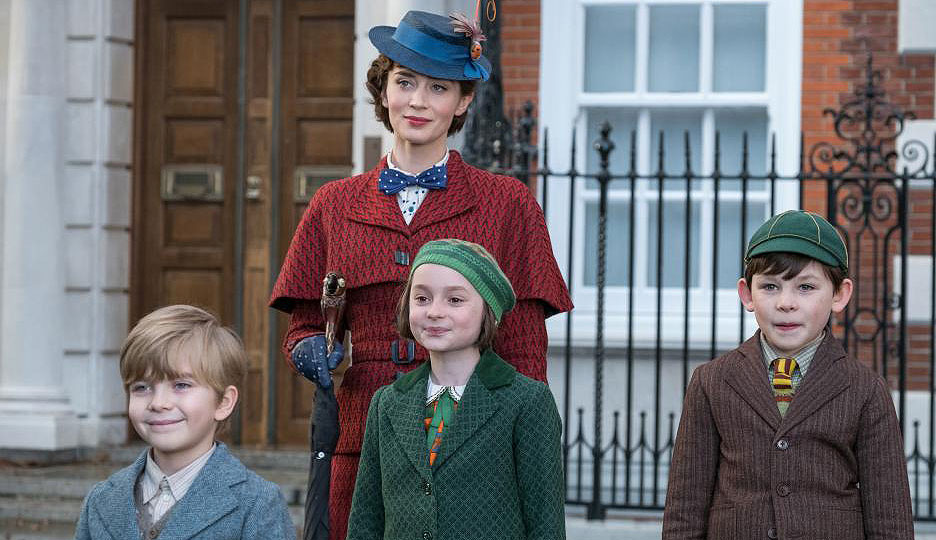 Let us get one very important thing out of the way, shall we? 1964’s “Mary Poppins” is delightful, and rather ahead of its time in terms of production and art direction, but it’s not a perfect movie. The dancing is largely clumsy, the children who play Jane and Michael are not very good actors and Dick Van Dyke’s performance, God love him, will likely go down in history as the worst accent ever put to film. So let’s not talk of “Mary Poppins Returns” having an impossible task following up the first film. It doesn’t.

It does, however, have some other things going against it, namely the idea of making a period musical in 2018 and playing it straight at the same time. The original “Mary Poppins” was released during the golden age of musicals. It won five Academy Awards and was nominated in a whopping 13 categories. Do you know what movie won seven of the awards that “Mary Poppins” lost? “My Fair Lady.” Yep, the 37th Academy Awards were a boxing match between two musicals, something that, according to my admittedly limited research, has not happened since. What a positively antiquated notion, and yet it is that time and spirit that Disney is trying to repackage here in an age when most Disney consumers’ parents hadn’t even been born yet.

This makes it all the more impressive that “Mary Poppins Returns” works as well as it does. The film is a technical marvel, the songbook is arguably better than that of the original film and it’s anchored by two superb performances from its lead actors (Emily Blunt and Lin-Manuel Miranda), but a threadbare script too often allows the real world to seep in and spoil the fantasy, not to mention a couple of dance numbers stay long past their welcome.

The Banks children, Michael (Ben Wishaw) and his sister Jane (Emily Mortimer), are now adults – 24 years have passed since the events of the first film – and Michael is trying to keep everything above water following the death of his wife Kate in the midst of a financial depression. With three kids of his own, Michael now faces eviction from the house on Cherry Tree Lane after missing three straight loan payments. With five days to come up with the funds to keep the bank at bay, Mary Poppins (Blunt) emerges from the sky to right the ship, as it were. Mary receives assistance from Jack (Miranda), a “leerie” (lamplighter) who remembers Mary from when he was a boy, and unlike Michael and Jane, Jack has not forgotten what it means to see the world through the eyes of a child.

It’s a ‘damned if you do, damned if you don’t’ proposition to make a follow-up to any musical from the “Poppins” era. They do know that “Moulin Rouge” has happened, and that movie musicals are forever changed, right? Give songwriters Marc Shaiman and Scott Wittman credit, then, for finding a way to color inside the lines while imbuing the songs with a sardonic wit that elevates them above the standard ‘60s showtunes. “Can You Imagine That?,” “A Cover is Not the Book,” “Turning Turtle” and “Trip a Little Light Fantastic” (this film’s equivalent of “Step in Time,” though Blunt steals it from the gents) more than hold their own with Disney’s finest of any era. Bonus points for finding a way to utilize Miranda’s mad rhyming skills in a wholly organic way. Remember, there were no rappers, never mind English ones, in the 1930s, but his solo in “A Cover is Not the Book” is sublime.

The story, though, is death. It is a means to an end, moving characters from Set Piece A to Set Piece B, and while the set pieces are lovingly imagined and brilliant in their own way, they cannot disguise the fact that there is no story. To make matters worse, the MacGuffin’s big secret is revealed absurdly early. There are a dozen ways they could have shot that scene without giving the game away, but instead they chose to give the game away, leaving the audience to wait approximately 105 minutes for the payoff.

Let’s close on a positive note, though, because Mary Poppins would have wanted it that way. Emily Blunt has been doing extraordinary work for over a decade at this point (indeed, industry people will have to decide whether to nominate the actress for her work here or her balls-to-the-wall performance in “A Quiet Place”), but her Mary Poppins is practically perfect in every way. Even the way she composes herself while riding on the back of a bicycle is impeccable. She knew what a difficult act that was to follow, but she chose to do it anyway and she killed it. The film has its issues, but so did the original. That they were able to get this close to capturing the magic of the original film is miraculous.