Trending
You are at:Home»Vices»Drink of the Week: The Scotch Old Fashioned 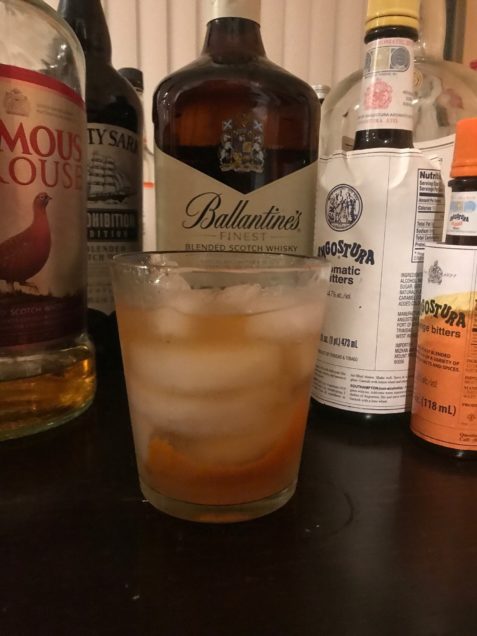 We cocktailans are not immune to untested assumptions. One of mine has been that it there’s a good reason why almost no one seems to ever make an Old Fashioned with Scotch. Indeed, it seems like I’ve heard more about the ur cocktail being made with London dry gin (which, I’ve had zero luck with) than I have about it being made with our planet’s ur whisky.

That began to change for me the other night when I was re-watching “Chinatown” — which I believe I last saw before I began my long, slow deep dive into mixed drinks back in 2011. Robert Towne’s script has Faye Dunaway as Evelyn Mulwray ordering a Scotch Old Fashioned as she hides in plain sight across the table from Jake Gittes/Jack Nicholson. I’d notices the smoldering tension before, but not the drink order. My next Drink of the Week was now a given.

As I’ve gathered from looking at a number of recipes, the secret to making an Old Fashioned with Scotch is to use a smaller amount of sugar in proportion to the booze. It’s a counter-intuitive adjustment because, as every whiskey drinker knows, Scotch is the most severe of the whiskies. Irish and American whiskies, especially bourbon, are notably sweeter. Scotch often tastes of smoke and leather. Indeed, Scotch whisky is so severe it even leaves out the “e”! Nevertheless, sticking to a more classic approach results in a drink that tastes pretty darn sickly sweet. Go figure.

This is my version stolen from multiple online sources, and it’s good.

Put your orange peel in the bottom of a double rocks/old fashioned glass, and add all of the ingredients except the Scotch. Muddle the orange peel. Fill the glass with ice, add the whisky, and stir until you’ve got enough dilution. Sip and contemplate the millennia of trial and error that it must have taken before mankind finally figured out a way to turn something as boring as barley into an elixir as magical as whisky/whiskey.

The Scotch Old Fashioned is much better than it has any right to be. It’s very nicely balanced between bitter, sweet and astringent flavors.. On the other hand, if you want to go all in on the sweet, you can try muddling an orange slice and a cocktail cherry. I did that; it went down easy, but I wouldn’t say it was an improvement.

My Scotches this time were my nearly empty large bottles of Dewar’s and the Famous Grouse and my brand new big bottle of Ballantine’s. This is my first experience with that brand and I have to say that it’s quite a good entry in the value-priced Scotch market. (My 1.75ml bottle ran me less than $20.00!) Its a mellow and good natured brew and can hold it’s own with the best in its price category. Indeed, the Scotch Old Fashioned was pretty much equally good with all three of the good, cheap blended whiskys I worked with  The higher end, and pretty excellent, Cutty Sark Prohibition Edition, the first 100 proof Scotch I’ve encountered, gave the drink a bit more of a smokey edge, if that’s your thing.