Trending
You are at:Home»Vices»Drink of the Week: The Weeski Cocktail 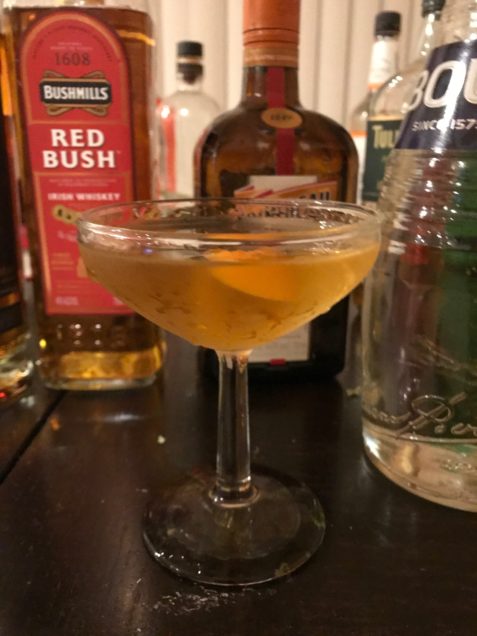 This week’s cocktail has a story behind it, but it’s a short one and not really earth-shattering. It seems that well-past-noted cocktail historian David Wondrich wanted to make Manhattans, but he was out of the usual North American whiskies and, for that matter, didn’t have any of the standard sweet vermouth on hand. Instead he had Irish whiskey and the medium sweet vermouth variation, Lillet Blanc. He threw in bit of triple sec and it was very good. The end.

Now, on to the drink.

Combine the liquid ingredients in a mixing glass or shaker — though I just don’t feel any need to shake this one — and stir vigorously, or shake if you must. Strain into a chilled, not overly large cocktail glass. And ponder why it’s more fun to spell whiskey “weeski” than either “whiskey” or “whisky.”

Last week I talked about the difficulty I’ve something had recapturing an amazingly good first try at a drink. While many drinks are nearly always good, they’re pretty much never the same kind of good every time. That gets more dramatic if you play around with different brands the way I like to.

The Weeski is a case in point. My first try employed Bushmills as my whiskey and Bols as my triple sec. It was kind of extraordinary, with both me and my in-house guinea pig agreeing that it seemed to have layers of differing flavors — sweet citrus, carmely bitter, and something kind of leathery played across my tastebuds. Beguiling.

Other iterations used Tullamore Dew and such variations on a theme as Bushmills’ Red Bush and Jameson Black Barrel. All were good, though not at all layered, whatever that means. The Black Barrel version was more spiky (in-house guinea pig said “sour,” which didn’t seem right to me). The Red Bush, which is more spiky straight than the others, was oddly sweet. One version returning to Bushmill’s but using the more bitter and high-end Cointreau as my triple sec was shockingly good. Almost perfectly.

Then it dawned on me that the original Wondrich Weeskis were likely made using standard Jameson. Using Bols as my triple sec, it was delicious, kind or carmel-like, but still not layered. Then I went with the complete original recipe and employed both standard Jameson and Cointreau along with the Lillet and bitters. It was mostly bitter and, with all due respect to the drink’s inventor, not one of my favorite tries.

I’d could try again with my original choices of Bushmills and Bols to see if that layered effect is repeatable, but why bother when it might not be? I’d rather just live with the memory of that magical first attempt.