Trending
You are at:Home»Vices»Drink of the Week: The Gin-Campari Sour 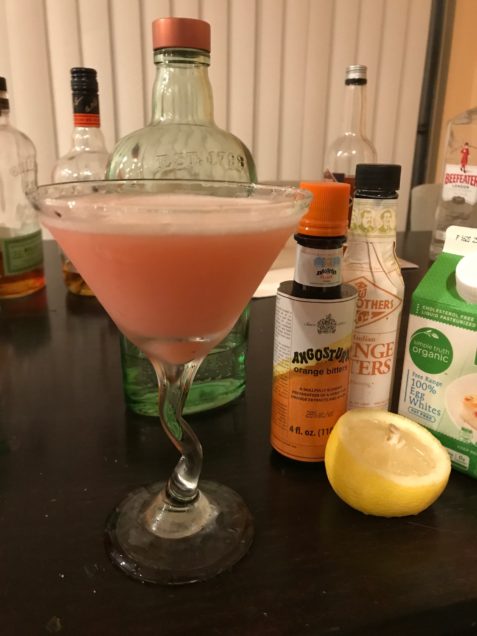 Today’s drink doesn’t come from any ancient cocktail tome that I know of and it’s name is simply descriptive. No stories to tell here. It’s going to be a long few weeks until the holidays, so it’s a good time for keeping things as simple as possible.

Some cocktails put me off at first and I grow to like them. More often, though, I love my first or second stab at a drink, but I’m never quite able to recapture the alchemy that made the initial one so magical. The Gin-Campari Sour is, I fear, is one of those.

I stole this one from a 2016 Saveur post, which says “gin, such as Plymouth.” So, I started with that and I found the drink something of a new perfect use of two of my favorite ingredients, Campari and egg white, with the gin providing a not too forward boozy base. I tried this one with both fresh egg white and packaged, pasteurized stuff. Some cocktailians insist that you get better results with whites straight out of the egg, but they both worked great. My strong hunch is that the only thing the pasteurized stuff lacks is the delicious tang of danger.

My next job was to see if using a standard London dry would be an improvement over the more balanced tasting Plymouth. Not at all. Beefeater seemed to work okay, and so did Tanqueray, Fords strong flavor was intrusive, but I can’t say it wasn’t good. Still, none of them came close to my first try. I then decided to test out the idea that the Plymouth iteration of the Gin-Campari Sour and tried it again. This time,t was better than the others…but not that much better. Indeed, I tried it once last time with Gordon’s Gin and the relatively mild flavor of that reliable, value priced London dry worked even better

In many respects, I feel like I never actually make the same drink twice. It keeps things interesting, but it’s frustrating enough sometimes to drive a man not to drink. (For a day or two.)