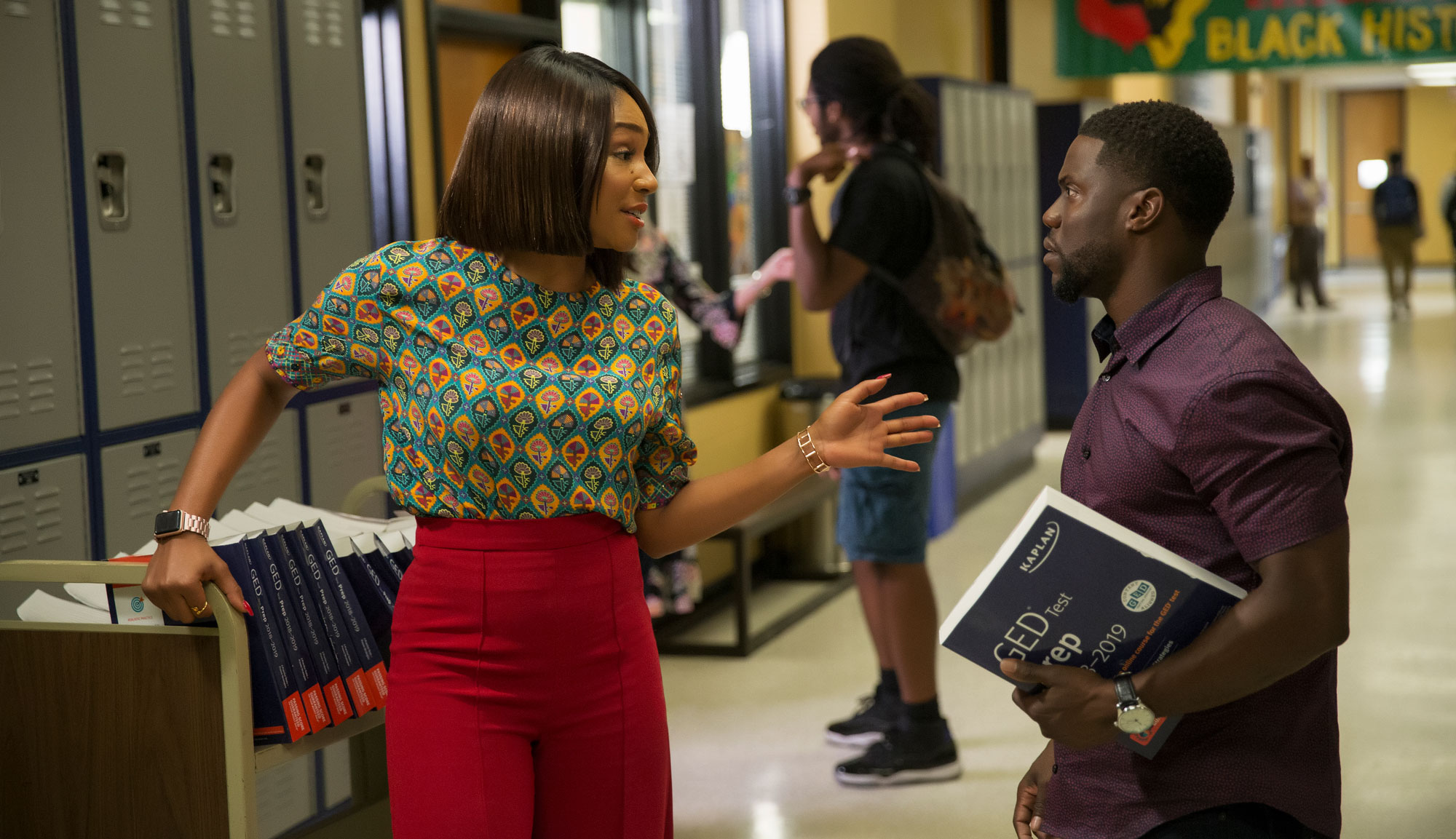 This is Kevin Hart’s world – we just live in it. Since his first big starring vehicle, 2014’s “Ride Along,” Hart has become a true-blue box office success story. His newest project is “Night School,” marking his first time working with director Malcolm D. Lee, who has quietly put together an impressive resume since bursting onto the scene back in 2002 with the delightful “Undercover Brother.” Perhaps more significant than Hart’s gravitational pull is the reteaming of Lee and star Tiffany Haddish after setting the comedy world ablaze with last year’s comedy hit, “Girls Trip.” Haddish immediately became a name in the broader pop culture sense, and “Night School” is the first opportunity we get to see her in a major role since becoming a big star. And that’s the interesting position we find ourselves in, because while Hart is the stand-up comedy and box office superstar, Haddish arguably has more cache at this moment. Putting the two together seems like a match made in box office heaven.

Hart is undeniably the star here as Teddy Walker, a fast-talking hustler who lives a life bigger than his means. He’s a born salesman and next in line to take over the barbeque grill business he seems to have a preternatural knack for. But Teddy is a high school dropout, and when an accident befalls the business, he has nowhere else to go. His successful high school buddy (Ben Schwartz) has a job lined up for him at his finance firm, but there’s one catch: he has to go back to night school and get his GED. Returning to the school he never graduated from, he discovers that his old high school nemesis (Taran Killam) has taken over as principal and is looking to ruin Teddy’s chances at putting his life back on track. His classmates (Rob Riggle, Al Madrigal, Mary Lynn Rajskub, Romany Malco, Anne Winters and Fat Joe via Skype from prison) are a colorful bunch of screwups, but all of them are committed to bettering themselves and proving they don’t have to remain in the lanes that have defined them their whole lives.

During the opening credits of “Night School,” it’s hard not to notice the film’s six screenwriting credits. That’s often a bad sign, pointing to a movie that may have been plagued by rewrites and studio intervention. Its opening scenes are pretty rough as well, but when Haddish shows up, “Night School” is immediately shocked to life. Once Teddy meets his classmates, the film morphs into a full-blown ensemble comedy (think “Community” meets “The Breakfast Club”) and manages to start generating laughs at a pretty regular clip. The characters are little more than broad sketches, but Lee has amassed a talented cast of character actors to breathe life into them. Malco comes out of these scenes the best, consistently entertaining as a factory worker who was replaced by a robot and has developed a healthy distrust of technology because of it.

To be honest, Hart is the weakest link in the film. “Night School” is very much an ensemble piece, but Hart is so addicted to the spotlight that he has a tendency to dominate things a little too much and use up all the air in the room. If you’ve seen any other Kevin Hart performance, you’ve seen this one; even his brief cameo in “The 40-Year-Old Virgin” is more than enough foundation for his entire career. You’d hope he would have developed some range over the last 14 years, but his schtick is what has made him one of the biggest names in comedy today, so it might be too much to expect him to stray from his cash cow. That’s all well and good, but it’s clear Lee wants to do a little more with the role and the movie than Hart is willing to allow.

On balance, “Night School” overcomes some of its stumbling blocks and proves that Malcolm D. Lee is one of the steadier hands in the world of mainstream studio comedy. He does quite a lot with quite a little, overcoming the simplicity and stereotypical nature of the too-many-cooks script to turn it into a simple but effective comedy. Haddish is a major talent, and this turn proves her range as an excellent follow-up to “Girls Trip.” She’s clearly underutilized but still comes off as the biggest talent in the room. If there’s any justice in the world, she’ll soon eclipse Hart as the next comedy superstar. When “Night School” embraces its destiny as a broad, crowd-pleasing ensemble comedy, it soars above its generic material. When the spotlight is solely on Hart, it stumbles, and you can feel the six writing credits grind against each other. There’s more than enough in “Night School” to entertain, however, and the nearly two-hour runtime ends up breezing by. It’s unlikely you’ll remember much about “Night School” in six weeks, let alone six months, but there are worse ways to spend a night at the movies.