Trending
You are at:Home»Vices»Drink of the Week: The 21st Century Cocktail 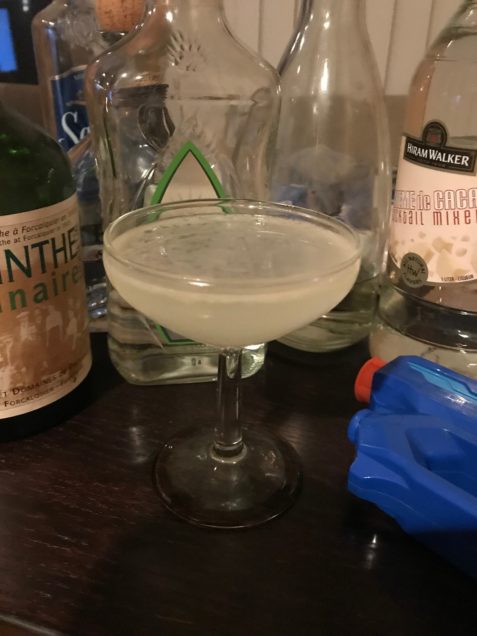 Today’s drink was created by New York-based star bartender Jim Meehan and included in Robert Hess’s The Essential Bartender’s Guide. Mr. Meehan actually lists is as one of the drinks that made his career, but mainly just talks about its name. By any name it’s an intriguing and tasty tweak on the 20th Century Cocktail which, in typical bassackwards fashion, I’ll be doing later on. It’s a logical enough progression because tequila was essentially unknown to the cocktail crowd when the first drink was created.

All in all, the 21st Century Cocktail combines some odd ingredients to create a remarkable result. If you have all of them handy, you very definitely want to give it a try.

Put a dash of your anise liqueur in a chilled cocktail glass and coat the glass. (I usually hold the glass on its side and gently spin it.) Dump out the remaining liqueur. Next, combine the other ingredients in a cocktail shaker with plenty of ice. Shake vigorously and strain into your anise-coated glass. Sip and think about what you can do to make sure people will be comfortable enough to enjoy a 21st Century Cocktail in the 22nd century.

It’s fun to give people a 21st Century Cocktail and try to have them guess what’s in it. They taste the lemon but are mystified by the rest. However, once you know what’s in there, it’s almost as much fun to try to tease apart how the ingredients blend to create something new. The chocolate undercurrents are definitely there, but this drink is not candy-like in any way. The agave flavor of the tequila blends with the lemon and the rich sweetness in to create something that really isn’t like anything else I’ve ever tasted.

Of course, your choice of ingredients will make a difference. My tequilas were Hornitos, Casa Noble, Roca Patron, and Sauza Blue Agave. My chocolate liqueurs were Hiram Walker and Gionelli. I used Absinthe Ordinaire and Herbsaint to coat the glass.

Contrary to my prejudices, the brand name Hiram Walker Creme de Cacao turns out to be a far better product on it’s own than the much less well known Gionelli brand. (It’s pretty hard to find upscale creme de cacaos, but I suspect Marie Brizard might be the class of the field.) While both liqueurs blended with the other ingredients to fascinating effect, the Hiram Walker gave the drink a more velvety feel to contrast with the astringent lemon and herbal tequila notes.

Honestly, however, I couldn’t taste any difference at all between using the Herbsaint or absinthe, but you clearly do need that anise undercurrent to pull the thing together. I’m sure Pernod or pastis probably work about the same.

Of course, the choice of a base spirit makes a big difference. Hornitos — which Robert Hess employs in his video take on the 21st Century — was pretty excellent. It’s a reliable, reasonably priced base spirit that has plenty of agave spirit but works and plays nicely with others and resulted in a suitably enigmatic and balanced 21st Century, Sauza Blue Agave is – surprise – very agave forward and, for some reason, the result produced a more lemony flavor. The more upscale Casa Noble and Roca Patron are actuallly quite similar in flavor with Hornitos on their own, but blended they really did seem to bring touch more subtlety to the 21st Century Cocktail. It’s not exactly beyond the infinite, but it does kind of push the flavor envelope in a way that’s appropriate to our time.