Trending
You are at:Home»Vices»Drink of the Week: The Daiquiri Fizz 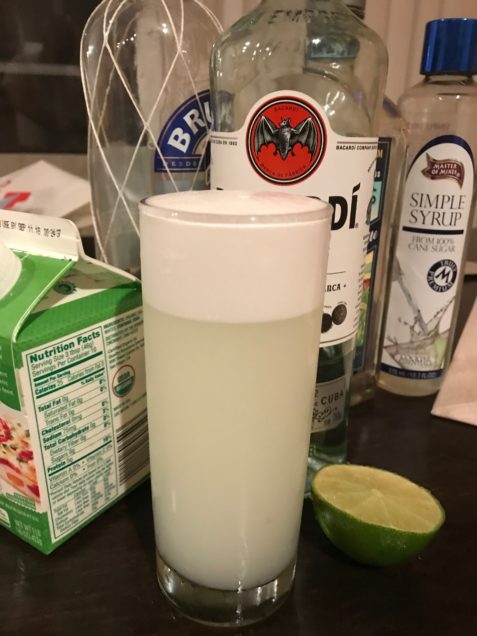 I’ve said this before, but claiming that you’ve created a cocktail is usually a questionable proposition. Sometimes it’s just that all you’ve really done is taken a preexisting classic and added, subtracted, or switched out one or two ingredients. Sometimes, it’s just something so self-evident that somebody, somewhere pretty much had to have done it.

In fact I feel pretty sure that somebody, somewhere, must have come up with the idea of taking a daiquiri and adding a bit of cold seltzer and egg white. Even so, I don’t think I’ve seen it anywhere, much less had it. Now I have! It’s simple and as good as any of the many wonderful fizzes I’ve had lately. Why isn’t this a thing?

Combine all of the ingredients except the soda water in a cocktail shaker. If you’re using a cracked egg, be sure to dry shake it without the ice to emulsify the egg white properly. Then, add lots of ice and shake very vigorously for at least ten seconds. Strain into a chilled, and not too large, Tom Collins/highball glass. Add the chilled soda water gradually and wait for the cappuccino-like head to form. Sip and contemplate how very fussy we humans are. It’s too hot, it’s too cold; the heater won’t work; the AC is busted; the planet’s burning up this summer and it’s all our fault. No pleasing some people, but a cool drink never hurts.

I tried this with several different white rums and they were all good. In this case, I think the simplicity of plain old Bacardi Superior was the best, but Meyer’s and Brugal Especial were just about as good. I was curious about using an aged rum, so I tried it with Bacardi 8. It was still good but a little too busy on the palate. This drin is just four things and four things only: sweet, sour, cold and actually thirst quenching. What else does anyone need?