Trending
You are at:Home»Vices»Drink of the Week: The Orangey Mojito 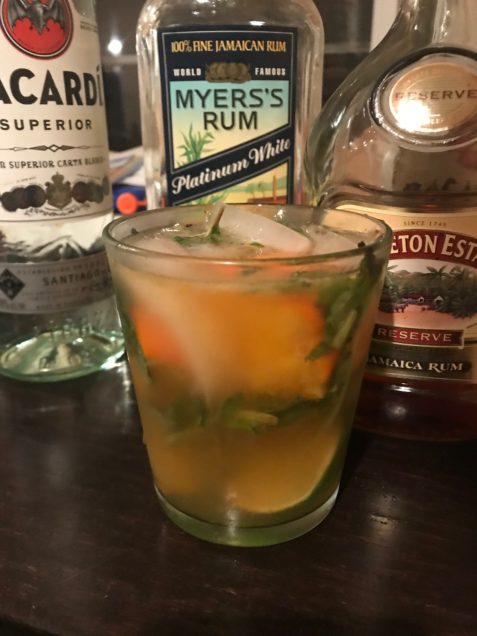 It’s almost been three years to the day since my last go at a Mojito variation.  I guess the middle of this very hot summer is a good time for another. Today’s drink is an adaptation of a recipe provided by an anonymous Food Network mixologist, which departs from the more typical preparation method of simply adding fresh juice and instead utilizes heavy duty muddling to extract the juice, much in the manner of a Caipirinha  Also, as you might have gathered from the name, this one throws some oranges into the mix. Let’s get to it.

In a large old fashioned/rocks glass (preferably a double size), muddle the citrus slices and sugar or simple syrup with vigor to release as much juice as possible. Next, add the mint and very gently muddle that. (Mint should always be muddled with more a love tap than a smash.) Next, add ice — it can be crushed if you’re ambitious — and stir as much as you can — this can be a challenge give the amount of stuff in the glass, but keep at it. You can also try to shake it in the glass if you’ve got the right size shaker to fit with your glass. Add  a splash or two or three of soda and stir some more. Sip and be cool.

Purists will insist on only using white rum for Mojitos, but the revelation here was that by far the best iteration of this drink featured Appleton Estate Jamaican aged rum. It’s good stuff with a nice gentle sweetness to it. I suppose, I shouldn’t have been surprised that it might alter the nature of the drink, but it was kind of a revelation. It was something more like an Old Fashioned or, I suppose, the Mojito’s close relative, the mint julep . My guinea pig insisted it didn’t taste like a Mojito at all. To a lesser extent, I should add that using simple syrup seems to help spread out the sweetness a bit better, so that might have been a factor.

Which is not to say white rum wasn’t good in this arguably more balanced variation on the classic. Plain old regular Bacardi is the standard choice in this drink, and it was just fine, as was Meyers’s White. My Bacardi 8 aged rum was a bit gentler than the regular white stuff, but closer to it’s brand mate than to the Appleton.