Trending
You are at:Home»Vices»Drink of the Week: The Cherry Blitz Fizz 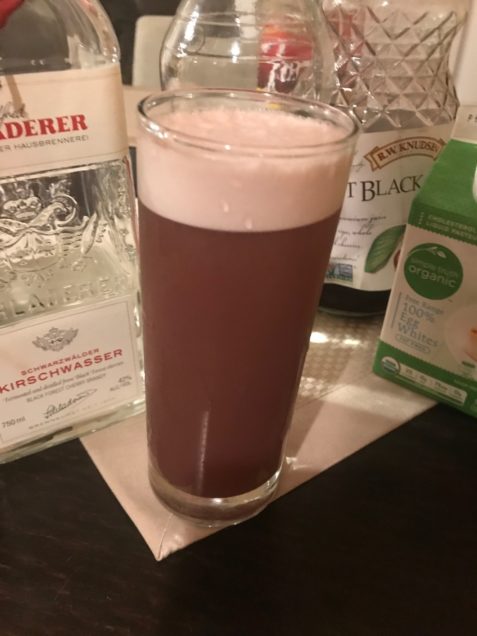 With Comic-Con finally behind me, a very hot week ahead of me and the busted shell of a 40 year old air conditioner above me, it was mandatory to continue my exploration of that most refreshing of all cocktail categories: the fizz. There’s something about the combination of milky emulsified egg white and chilled soda water that can make a mixed alcoholic drink far more refreshing than any booze has the right to be.

I started out intending to do an apple brandy based recipe I had found, only to realize that I had run out of the stuff. It was time to get creative and fashion a drink of my own. As I contemplated my chaotic liquor cabinet, what jumped out at me was my two bottles of kirsch, aka kirschwasser. If you’ve never heard of it, and most people have not, it’s a clear unaged brandy (eau de vie), that is derived from the juice of cherries, Morellos when you’re at the high end of things. I decided to go all-in on the cherries.

Combine all the non-carbonated ingredients in a cocktail shaker. If you’re using fresh eggs, dry shake all the ingredients without ice to emulsify the egg white. If you’re using packaged egg white you can skip over to the next step, which is adding lots of ice and shaking it very vigorously for as long as you can manage. Next, strain into a chilled highball/Colllins glass or large rocks glass. Top off with the chilled carbonated water and wait just a few seconds for that cappuccino-like topping to form. Start sipping and  thank Mother Nature or Whomever for the simple cherry. Without it, pies and double entendres would not be the same.

The base spirit divide this time was fairly stark. I think I played close to $60.00 when I purchased my current bottle of Schladerer Kirschwasser and  less than half of that for my Hiram Walker. While the Schladerer is one of the more expensive bottles I’ve bought, the difference in quality is a pretty good example of getting what you pay for. Even so, the Hiram Walker version of my Cherry Blitz is still very good. Along with all the creamy sweetness, there’s a harsh undercurrent running against all the sweetness that some may appreciate. However, I think the smoother, but still very flavorful, version I made with the more expensive product was, on the whole, pretty dramatically better to my taste and probably most other people’s. Sweet, juicy and refreshing but, importantly, you can still taste the kirsch.

I’m seeing right now that you can get Schladerer for about $15 less than I paid for it, which makes it a much better deal. It’s interesting to me that Hiram Walker and the other less expensive kirsches (some of which I may try later) call themselves “imitation cherry brandy.” I’m not very clear on what that means, but I can remember eating imitation chocolate and imitation vanilla ice cream as a kid. Even then I sensed that the real thing is usually also the better thing.