Trending
You are at:Home»Vices»Drink of the Week: Bob’s Boulevardier Fizz 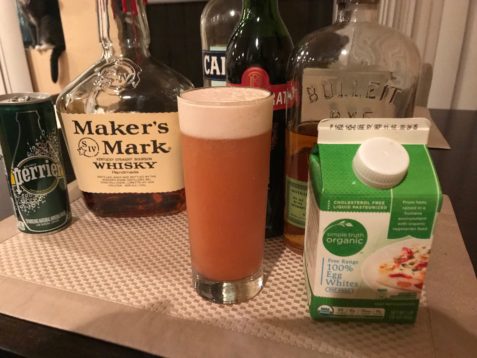 It was a good thing I decided to keep with the cooling power of the fizzes this last week, because just as the very worst of what could well be an epochal heatwave had passed, so did my AC. Heaven spare me! In any case, while I wither in the warmth of the LA’s SFV, we’re moving on from last week’s simple adaptation of a Negroni, to doing almost exactly the same thing with the Negroni’s tougher brother, the Boulevardier. I’m throwing my first name into the name of this fizzy variation to distinguish it from another, very decent sounding drink available at the Nobu branch in Malibu which kind of beat me to the punch. It’s pretty much what I did last week, but with whiskey and more of it.

Combine all the ingredients, save the soda water, in a cocktail shaker. As usual, if you’re using a cracked egg white, dry shake it first to emulsify it and get that nice, milky consistency; you won’t need to with packaged egg white, which I’m convinced works equally well. Next, add ice and shake vigorously for as long as you can hack it. Strain into a fairly large Tom Collins/highball glass (a double rocks glass will do in a pinch), and top with chilled soda water. Once again, wait a minute for the drink to separate and the cap to form on the top. Sip and contemplate how alcohol can create the illusion of warming you, while a fizz can give you a brain freeze, which does not actually freeze your brain. Kinda.

Overall, I think my Boulevardier variation can hold it’s head high not only with last week’s Negroni spin, but with the Boulevardier itself. It’s complex and quite bitter as well as sweet but the orange juice, egg whitte, and soda lighten things up. There’s a lot dancing on your tongue but the overall refreshment factor is quite high.

This week’s bourbons were Maker’s Mark and Evan Williams Bonded Bourbon, which brought a heavier, not-unpleasant bitter caramel-flavor to the product. Jim Beam Rye was a bit more edgy. But the clear favorite this week was Bulleit Rye, which created a gentler harmony that landed very nicely on the tongue, I thought.