Trending
You are at:Home»Vices»Drink of the Week: The Whiskey Fizz 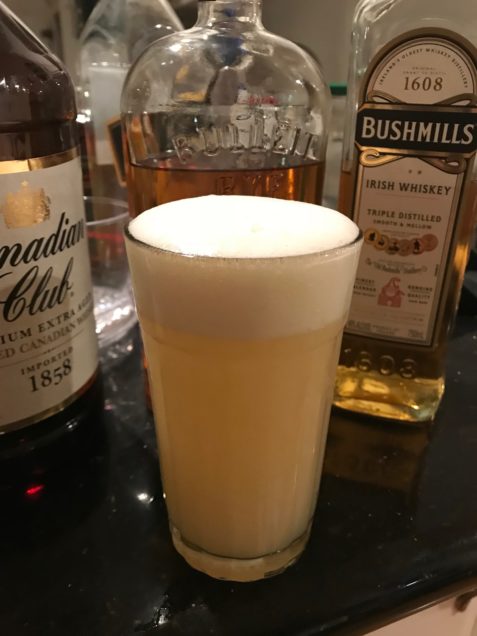 If you try Googling “whiskey fizz” you likely won’t find another specific cocktail recipe with that name, but that doesn’t mean I can claim to have invented today’s beverage. Substituting whiskey for gin in last week’s Silver Fizz is so self-evident, apparently no one who’s online has thought to write an actual whiskey variation down in recipe form, though you can find endless elaborate fizzes in which some type of whiskey is often a key ingredient.

Still, I think using whiskey instead of gin changes the flavor enough, and is definitely tasty enough, to claim it’s very own drink of the week. See if you agree.

Once again, we combine our choice of spirit with the lemon juice, egg white, and sweetener in a cocktail shaker. Next, shake without ice (aka, the old dry shake trick). You can maybe skip this step if you’re using the packaged egg white, which is mostly pre-emulsified. Add lots of ice and shake very vigorously for as long as you can stand. Strain into a Tom Collins/highball glass, preferably chilled. Carefully top off with cold soda water. Wait a brief moment for the fizzy-cap to separate from the rest of the drink. Sip and give thanks for whoever it was who decided that fizzy water was a nice variation on the not fizzy kind.

As far as I can tell, it’s possible that there is not a single whiskey from anywhere that doesn’t work well in a fizz. Pretty much all of my attempts had a nice, round flavor that compares pretty favorably with the Silver Fizz, especially for those who like their drinks more booze forward.

My first Whiskey Fizz was with Maker’s Mark bourbon, with my in-house guinea pig approved of, but I found it very slightly off the mark, you should pardon the expression. Maybe just me. On the other hand, I loved what happened with Canadian Club. The gentleness of the  Canadian  flavor really formed a nice bed for the sweet, sour, and just plain refreshing aspects of the drink to come forward. Bulleit Rye was similar, and the added flavors of the more complex American rye didn’t get in the way. My Scotch was Johnnie Walker Black, and the smokey, astringent flavors worked very well, I thought. As for my beloved  Bushmills, I once again express puzzlement about why Irish whiskey isn’t considered at least as mixable as any rye.