Trending
You are at:Home»Vices»Drink of the Week: TCM Fest 2018 Salute #2 – The Henry Rufus (“Will Success Spoil Rock Hunter?”) 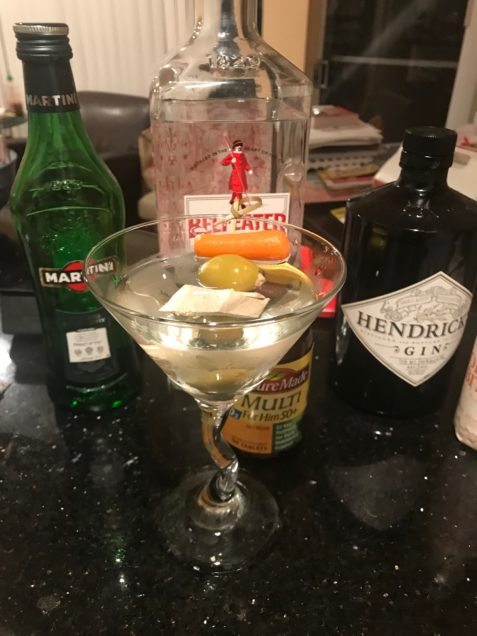 1957’s “Will Success Spoil Rock Hunter?” is, along with the James Bond flicks, one of the movies that severely warped me at a very early age. It used to show pretty regularly on the afternoon movie program of my local CBS affiliate during my latchkey childhood, and feels as if I saw it at least fifteen times on old time low-def pan-and-scanned TV before finally checking out it’s brilliant widescreen compositions on the silver screen, probably more than once at the New Beverly in the 1980s and ’90s.  My Turner Classic Film Festival viewing was likely my first this century, but it’s a movie that’s permanently engraved in this’s writer’s mildly perverse psyche.

But let’s get back to part where I got warped. Like the Bond films along with some problematic sexual politics through an arguably satirical lens, “Rock Hunter” set-up alcohol as a totem of adulthood that was both alluring and vaguely dangerous. It’s probably best known today as a zany forbear of “Mad Men”  and was also something of a vehicle for rising comedy star Tony Randall in the title role and the already legendary blonde bombshell Jayne Mansfied, essentially Marilyn Monroe distilled and fortified.

An over-the-top spoof of the advertising world as it then was, the film tells the story of the semi-Faustian bargain an earnestly ambitious ad man (Randall) makes when he finds himself in a mostly fictional love affair/publicity stunt with a superstar who looks an acts an awful lot like Jayne Mansfield. The Faustian part is that he’s already blissfully in love with his fiance/secretary (Betsy Drake) and trying to be a good example to his live-in teenage niece (Lili Gentle).

“Rock Hunter” was made by Frank Tashlin, a former director of Warner Brothers cartoons who transitioned from Porky Pig and Daffy Duck to Dean Martin and Jerry Lewis, with whom he made several comedies after Lewis went solo. Tashlin’s movies were something in the nature of live-action cartoons and he reached a a high point in “Rock Hunter,” populated by cartoon characters in a candy colored mise en scène that got the attention of the French New Wave cineastes who gave us words like “mise en scène.” It’s easy to see what they saw in it. Like the best of the Warner Brothers cartoons it exists in an alternate universe where life is always intense but nothing but fun really matters very much.

While Tony Randall is at his at his funniest in the title role, it’s the supporting character of Henry Rufus who embodies the “Rock Hunter” ethos. Played by avuncular Henry Jones, one of the best and busiest character actors of his time, Rufus is a very middle-aged man-child (an analogue of sorts to Roger Sterling); a pill popping dipsomaniac who lives in a continuous cocktail party of the soul. He likes to turn random words into diminutives — Henry speculates at one point that the ad firm he and Rock work for will “foldy foldy” — and is rarely seen without a rocks or martini glass in his hand.

Seeing “Rock Hunter” for the first time in probably two decades or so at TCM Fest, I was saddened to find that my memory of Mr. Rufus suggesting a “drinky drinky” was but a figment of my childhood imagination. I was, however, reminded of a line that planted the seed of my first cocktail first love. When Rufus admits to Hunter that he’s been going on martinis and pills all day, the less relatively abstemious Hunter expresses some concern. Rufus reassures him. “I also eat the olives, that’s where the nutrients are.”

I’ve loved olives as long as I can remember, when the time came in my life to consider mixed drinks a bit more grown-up than Kamikazes and <shudder> Long Island Ice Teas, I gravitated towards martinis –primarily because of the olives. The very dry martinis then in fashion — basically just iced up gin or vodka — took some getting used to, but at least at the bottom of the whole thing was a fruit of the vine that tasted much better than it otherwise would, not just because it had been soaking in booze, but also because I’d consumed the booze. While I remembered the sage words of Mr. Rufus, I never seriously thought of actually trying to live on one or more cocktail garnishes until this week.

My goal with today’s cocktail is to a create  martini that could provide just enough sustenance for Mr. Rufus so that he could hang long enough for the cirrhosis to kick. Of course he’d have  to eat all the garnishes; that’s where the nutrients are.

The Henry Rufus (in honor of “Will Success Spoil Rock Hunter”)

On a small skewer mount your carrot, olives and tofu in whatever order you prefer. Be careful with the carrot and the almond inside the olive. I learned the hard way tat trying to pierce harder foods too quickly can lead to garnish related injuries.

Next, conbine the liquid ingredients in a mixing glass or cocktail shaker and stir vigorously. Strain into a chilled martini glass, add the food items, and sip. No fair eating the garnishes until you’ve consumed at least half of the drink.

The Henry Rufus doesn’t particularly depend on brands. It’s really just a matter of making the best dry martini you can and picking out reasonably tasty garnishes. So, the Beefeater, Hendricks gins and Martini and Noilly Pratt vermouths I used all worked fine. I always like to use orange bitters in all my gin martinis, but I figure that it also adds trace of vitamin C.

Moving on to the foods which would keep our pal Henry alive, olives are, in fact, very nutritious. They contain a fair amount of carbs and fiber, a little bit of protein, and lots of healthy fats, including the omega kinds we’re always hearing about. They are also pretty rich in vitamin E and a few odd minerals and plant compound antioxidants. The almond inside one of my olives contains some protein and fiber, more vitamin E and B2 some of our favorite minerals like potassium and calcium. You can find some more of the latter in the blue cheese along with a bit of protein and other odd milky goodies

Moving beyond our delicious green ovals, carrots are famously rich in vitamin A, important for vision, but also vitamins C — I’m guessing enough to ward off scurvy — and K, as well as a buttload of important minerals. Finally, tofu — the curd of “the bean that thinks it’s meat” — it contains plenty of protein and all the mandatory amino acids, plus B1. No nasty ber-beri for Mr. Rufus!

It might surprise you to read that none of these items nterferes with the experience of a good dry martini in any way and, really, I think they all add something to the flavor, or at least benefit from being soaked in booze for a bit. As you might expect, the least tasty is the tofu, which is more of a flavor absorber than a flavor haver, but I love the stuff anyway.. And, Henry needs the protein to dance the night away with Joan Blondell!