Trending
You are at:Home»Vices»Drink of the Week: TCM Fest Salute #1 – The Park Row 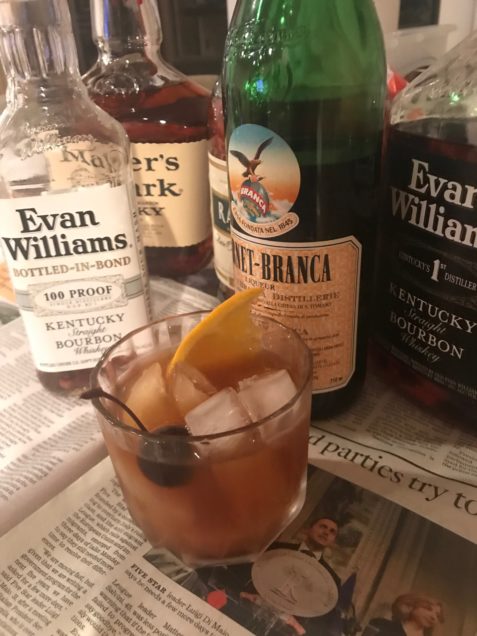 Early on in 1952’s “Park Row,” a sturdy young woman bartender (Tina Pine) rattles off a lengthy list of mixed beverages that delighted my classic cocktail obsessed heart. Mind you, this is not Brooklyn or Culver City today, but Manhattan in the 1880s and “decent” women were not to be found in bars, no matter how good the drinks were!  That’s not the subject of the movie, however. Sam Fuller’s 1952 love letter to a free and mostly honest, but far from saintly, press is far more concerned with issues of truth, justice, and the American way than gustatory pleasure. It stars Gene Evans — a character actor given a shot at star status — as a mostly virtuous cigar chomping newspaperman fighting for circulation and for funding the base of the Statue of Liberty. Sure, he mainly just drinks beer, only switching to whiskey during a bender, but he’s a good guy — he only falters when he meets the beautiful, tough-as-nails heiress who runs his primary competition (intriguing Mary Welch). It’s less sensational than most of Fuller’s work, but it’s darn entertaining. Like so many high-minded older films dealing with politics, it also feels like something of rebuke to our present historical low point. (Last year’s Born Yesterday is another one.)

In honor of this reminder of a time when journalism was no less dirty but more blue collar and therefore less blinkered by wealth and privilege, I stole half of my recipe from the Bartender. That drink was created by writer Robert Simonson as a variation on the Old Fashioned, which employs a bit of Fernet Branca, an amaro as hardbitten as Mr. Fuller himself, in place of the traditional bitters. I’ve added some of my favorite fruity additions that I tend to prefer in my Old Fashioned. I think it’s appropriate to the 1880s because, from what I’ve seen, they liked their specialty drinks a bit more elaborate and fruit laden than today’s cocktailians. See what you think.

Put the bourbon/brandy, Fernet Branca, and sweetener in a cocktail shaker or mixing glass. Add one orange slice and one cherry. Muddle the fruit, add lots of ice, and stir vigorously. Strain into an Old Fashioned glass with fresh ice. Stir the drink some more and add your second orange slice and cocktail cherry as garnishes. Sip and ponder how the hell America is ever going to start believing the truth again.

My bourbons for the Park Row were Evan Williams, Evan Williams 100 Proof Bottled in Bond, and Maker’s Mark. That was in lieu of Buffalo Trace, which was Robert Simonson’s suggested choice for the Bartender; it’s apparently currently out of supply in the L.A. area. Maker’s actually did produce the most pleasant and easily drinkable version, but the other bourbons did add a nice fighting spirit. My brandies were my default, Reynal, and Martell VS Cognac. I enjoyed the more laidback flavor of the Reynal version, which was fruit forward in a way I really enjoyed.

And now, let’s drink to Mr. Fuller and a free press.