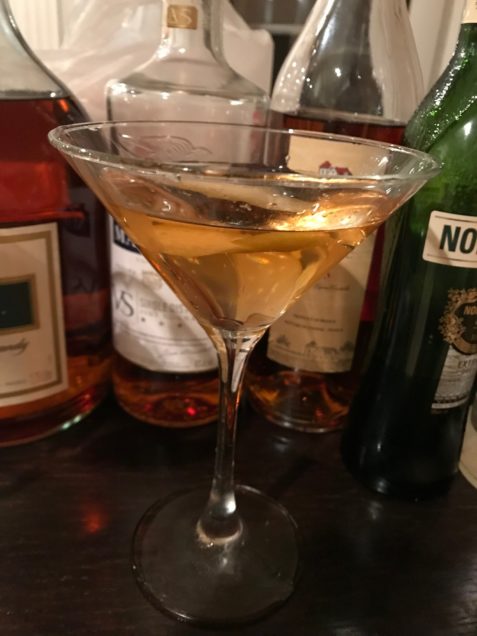 You’ve never heard of silent film actress Pépa Bonafé and that’s nothing to be ashamed of. I’m more of a talkies guy and I’m arguably somewhat overly US-centric in my perspective, but I know my Mary Pickfords from my Dorothy Gishes and my Jeanne Moreaus from my Simone Signorets, and I’m completely unfamiliar with Mme. Bonafé and her entire filmography. I imagine 1910’s “Shylock” had something to do with “The Merchant of Venice.”

Anyhow, a cocktail by any name will still get  you tipsy, and this week’s drink was found by me mainly because I’m digging the combination of Cognac/brandy and vodka I discovered last week. As for as the provenance of this one, as far as I can tell, it was featured in a 2012 roundup of Cognac beverages that followed an intro in which David Wondrich, arguably both the Roger Ebert and the Pauline Kael of cocktail historians, argued for spending lots and lots and lots of money on high end Cognacs and using them in cocktails, and was one of the suggestions, though it’s unclear whether or not Wondrich actually endorses this drink.

The other thing that’s interesting about Pépa  is that it’s a drink presumably dating back to the 1920s which has vodka in it. Here in the States the Russian water-alternative was, as far as I can gather, something of an exotic rarity prior to Hueblein’s popularization of Smirnoff during the 1950s. I guess it’s possible this drink was consumed mostly in the many American style bars that populated Europe during the prohibition era and prior, where vodka might have already been stocked. Or, maybe it’s lying about its age.

In any case, if you like your drinks dry and sophisticated, but also inviting, this one’s for you. If you like a Fifty-Fifty, there’s a good chance Pépa  might be your thing.

Combine everything but the lemon in a mixing glass or cocktail shaker and stir vigorously for a good 15 seconds — I can’t bring myself to shake this one, and I must have a reason. Strain into a chilled cocktail glass and add your lemon twist. Sip slowly, and think of what this rather wondrous drink would taste like if you could afford to drop $70.00 or more on Cognac.

Overall, this is very definitely a strong but enjoyable drink for adults, and probably not for most cocktail newbies. On the other hand, for a hardcore cocktailian, it makes a pretty lovely alternative to a wet Martini or the much less well known Dry Manhattan.

On to the ingredients, mostly the same as for last week’s drink. The Martini dry vermouth might have produced a more harmonious result than the slightly stronger and more astringent flavors in Noilly Pratt Extra Dry. I also had good, and notably different results using Angostura — everyone’s default aromatic bitters — and Fee Brothers, which packs a slightly more spice-heavy punch for a slightly more confectionary effect.

But back to the brandies. Reynal, my highly mixable default brandy was just okay. The low key flavors made for an excessively mild and plain beverage. My legit Cognacs did better. Martell VS and Maison Rouge were both quite good, though I think I somehow preferred the latter’s edgier flavor in a Pépa.

And, yes, it didn’t make much difference whether I used my Stolichnaya or Smirnoff vodkas. The 100 proof Smirnoff did raise the stakes in an enjoyable matter, however.

Finally, about that garnish. Since this drink has a hint of sweetness, I thought switching out the lemon peel for a cocktail cherry might be fun. Nope. It was just wound up bringing out the more unpleasant bitter flavors and sickly sweet flavors. Stick with the twist.