You’re a man who usually brims with smelf-confidence. But from time to time, you need guidance on the finer points of manhood; things that you can’t ask your mom about.

Who do you ask for help when it comes to your fledgling manhood? Introducing the Old Spice “Contempor-MANLY” lessons for guys now available on the Old Spice Facebook page or below as an embedded video.

As the epitome of modern masculinity, world-renown Old Spice Guy and Actor, Terry Crews (“Brooklyn Nine-Nine,” “The Expendables” film series, the upcoming “Deadpool 2,” and many more!), is teaming up with Old Spice to help celebrate the brand’s 80th anniversary.

“Believe it or not, this is Old Spice’s 80th birthday!” said Crews when he explained the campaign. “And to me as a kid some of my earliest memories are my dad using the old ceramic bottle with the boat on it,” said Terry about the  Nothing can take you back in time like the sense of smell. Old Spice has launched a new collection, the 80th Anniversary Capsule Collection. Old Spice is the number one selling deodorant/anti-perspirant and body wash brand with guys of all ages. And with our “contempor-MANLY” live stream and video available after the stream is over, viewers can tell me what type of contempor-MANLY tasks they’d like me to complete. I’m taking suggestions from viewers and then the viewers vote, and I perform that task. For example, should I fold my laundry or ponder my future? Should I hammer a nail or get a full body work out in?”

Crews is steeped in the importance of guys getting in touch with the many sides of their masculinity and will aid them in their quest by taking them through a a fully interactive marathon of of what it means to be a modern man with 80 things, in 80 minutes, in celebration of 80 years of Old Spice and the brand’s long heritage of helping guys navigate the seas of manhood.

Dudes with a thirst for knowledge can watch the recorded live stream via Old Spice’s Facebook page or via this embed: 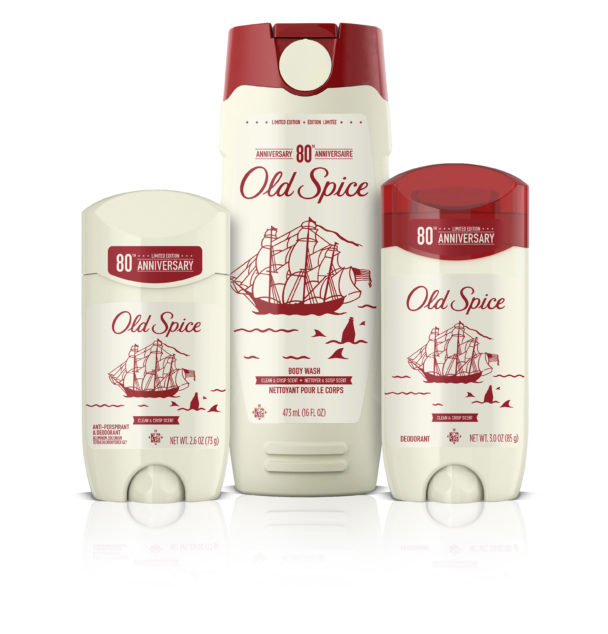 Old Spice is celebrating 80 years as the manliest grooming brand on the planet with its 80th Anniversary Capsule Collection –capturing 80 years of smelling awesomely crisp and clean. Available now at Walmart, the Old Spice 80th Anniversary Capsule Collection comes in anti-perspirants, deodorants and body washes, offering a limited edition scent that features refined watery notes complemented with citrus and a rich base of signature wood and musk. Guys can enjoy this limited edition scent during 2018. Get it before it’s gone!

●Did you know Old Spice was originally a fragrance for women? It was so popular that the Shulton Company changed the formula, added some citrus notes, and introduced Old Spice for Men and its famous buoy bottle in 1938.

●Throughout the 1950s and 1960s, Old Spice advertising featured the “Mariner Men” or sailors onboard ships. A strong nautical theme has always been in the brand’s design.

●In 2003, Old Spice introduced its High Endurance Body Wash, the first mass-market body wash made specifically for guys. Up until that point, 46% of men were using their girlfriend’s or sister’s body wash.

●Also in 2003, Old Spice introduced its popular Red Zone line-up of anti-perspirants, deodorants and body washes, and continues to roll out popular scents including Pure Sport and Swagger.

●In 2010, Old Spice made groomingand pop culture history when Old Spice Guy Isaiah Mustafa came roaring onto the scene on a horse, with the famous words: “Hello, Ladies.” With the “Smell Like a Man, Man” campaign, the brand was speaking directly to women for the first time (knowing that they oftentimes influence or purchase product for the men in their lives), and Old Spice body wash sales soared. Thanks, ladies!