Trending
You are at:Home»Lifestyle»Arequipa: What to See and Do in Peru’s White City 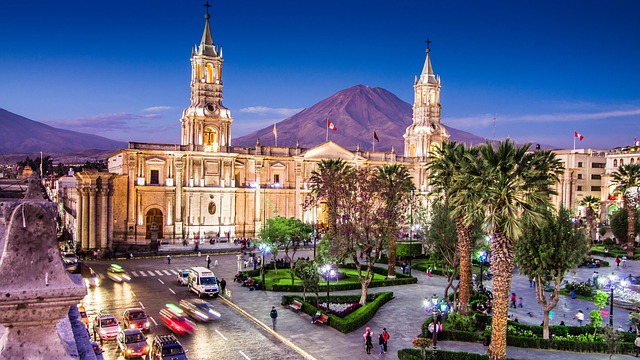 Known for its gorgeous colonial-era architecture made from sillar, a white volcanic stone, Arequipa is the second-largest city in Peru and one of its most stunning tourist destinations. This beautiful, colonial city combines the Baroque techniques and designs of Spanish colonial architecture with the influence of local native culture, for a city center unlike any other in the world. Don’t miss these local attractions when you visit this UNESCO World Heritage city.

Plaza de Armes forms the main town square of Arequipa, surrounded on all sides by colonial architecture constructed from gleaming, white sillar. To the north side of the plaza, you’ll see the Arequipa Cathedral, which was originally built in 1656 but has since been rebuilt multiple times due to damage sustained from a catastrophic fire (in 1844) and an equally devastating earthquake (in 1868).

In fact, the cathedral in Arequipa, Peru is nothing if not resilient; the structure has regularly suffered earthquake damage since its original construction, but locals always rebuild it – and why wouldn’t they? The cathedral’s pulpit was carved in France; the enormous Byzantine altar lamp was built in Spain; the organ was imported from Belgium; and the cathedral itself is one of only a handful in the world entitled to fly the flag of the Vatican. The cathedral, and the La Compañia cloister that stands next to it, are particularly representative of Baroque religious architecture.

On the other three sides, the Plaza de Armes is surrounded by further examples of colonial-era arcaded structures, which house a variety of cafes and restaurants. Explore the quiet back street behind the cathedral, where some great shopping is to be had. You may want to dedicate an afternoon to strolling the areas of the center city surrounding the plaza, where many of Arequipa’s nearly 250 colonial-era structures are still in use as shops, restaurants, and banks, despite being named UNESCO Human Heritage sites.

Near Plaza de Armes, you’ll find the Museo Santuarios Andinos, or Andes Sanctuary Museum, which houses the mummy of Dama de Ampato, also known as Juanita, an Inca girl who met her end as a sacrifice to the gods in 1450, when she was only 12 years old. Her body is one of the most well-preserved natural mummies ever found. But before you reach the glass-fronted cooler that houses her remains, you’ll be treated to a compulsory guided tour of the museum’s entire collections, which include a number of other artifacts and cultural objects from the Incan empire. The museum and tour are free, but you should give the tour guide a tip at the end.

Located three blocks from Plaza de Armes, the San Camilo Market is Arequipa’s oldest shopping center. For over 130 years, locals have come here to buy fresh fruit and produce, meats, giant guinea pigs (for eating), cheeses, beans, potatoes, jams, and breads. The second floor houses a cafeteria where you can get a hearty meal full of local flavor, and people-watch for a while.

The Convento de Santa Catalina, also known as the Monasterio de Santa Catalina, is a 23,900 square yard (20,000 square meter) complex located close to the Plaza de Armes. Founded in 1540, the convent remains a sterling example of colonial architecture, with its self-contained streets, gardens, and facilities including the Profundis Room, where the order’s dead are memorialized. Hire one of the tour guides for an hour-long exploration of the grounds, but leave yourself plenty of time to explore on your own after the tour is complete. Don’t miss the café on Toledo Street, where you can buy espresso and fresh pastries.

The Puente Fierro is one of many lovely bridges in Arequipa, but is especially notable because it was designed by someone you may have heard of – Gustave Eiffel, the architect of the Eiffel Tower. At the time that it was built, in 1882, it was the longest bridge in the world, and it remains the world’s seventh-longest non-suspension bridge. You’ll find it in the sedate residential neighborhood of Vallecito, about 10 blocks from Plaza de Armes. Plan to get there between 4:00 p.m. and 5:00 p.m., to get the best views and pictures of the volcanoes outside the city.

The Mansion del Fundador, or Founder’s Mansion, is a lovingly restored Spanish colonial villa just outside the city. Originally a country estate used to house civil dignitaries and ecclesiastical visitors during the colonial era, it is now a tourist attraction, where visitors can marvel at the 16th-century architecture, ashlar masonry, antique furniture, and colonial-style décor.