Trending
You are at:Home»Vices»Drink of the Week: Cameron’s Kick 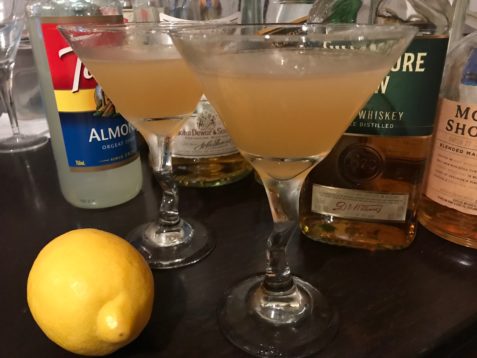 Today is Good Friday, tonight is the first night of Passover, Sunday is Easter, and today’s drink…has nothing to do with that, It’s not even kosher for Passover. Oh well.

A couple of weeks ago, when I did bother to acknowledge St. Patrick’s Day (priorities!) I stole today’s drink and repackaged it as The Quiet Man’s Kick, merely  swapping one type of whiskey for another. Since the original drink is a classic in its own right — little known here in the Southwest but reportedly very popular in NYC, I thought I should give it its due.

First published in a 1922 book by Harry McElhone of Harry’s Bar fame, Cameron’s Kick, we’re told,  was revived in 2005 by cocktail historian David Wondrich. No one knows who Cameron was or how he got his kicks. Nevertheless, the drink is distinguished by employing a combination of the two types of whiskies least commonly used in cocktails: Irish whiskey and Scotch.

I’ve never quite gotten the prejudice against these two preeminent whiskies. While the smokiness of Scotch can be a tad daunting, I’ve had way too much success with Scotch based cocktails to be intimidated by a little peat. Moreover, I have no idea at all why people think the gentle flavors of Irish whiskey are any harder to mix than, say, Canadian, rye, or bourbon. Indeed, the fact that this drink works at all kind of proves my point. Let’s get to it.

Combine the ingredients in a cocktail shaker with too much ice. Agitate very vigorously for as long as you can stand — this one needs to be cold — and strain into a chilled cocktail glass. Sip and consider whether it’s true that, while conventional wisdom is always conventional, it’s often not particularly wise.

This is a very nice variation on a whiskey sour, and is definitely for those who like their sweet and tart flavors highly pronounced. The orgeat adds nutty nuances you’d never get with your standard simple syrup or grenadine, and the two whiskies very much hold their own.

My Scotches were Dewars, Johnny Walker Black, and Monkey Shoulder. Bushmills and Tullamore Dew constituted the Irish contingent. Honestly, every combination I used came out largely the same except those that featured Monkey Shoulder, which is very good but sweeter than most Scotches, perhaps a bit too sweet for Cameron’s Kick. I also have to say I lean a bit towards Tullamore Dew in general; Bushmills is great, but TD has a fuller flavor with a hint of caramel to it that I really like, and which I think worked slightly better in Camerons’ Kick.

I should add here that most recipes for this drink call for one ounce each of the whiskeys and a half an ounce each of the orgeat and lemon juice. That’s perfectly respectable but I just liked the slightly different proportions you get with the larger version, allowing the non-alcoholic ingredients to play a  larger role. I didn’t put it in the recipe, but it’s fine to use an orange twist in this one if you like.