Trending
You are at:Home»Lifestyle»Funny and Scary Movies About Sororities and Fraternities 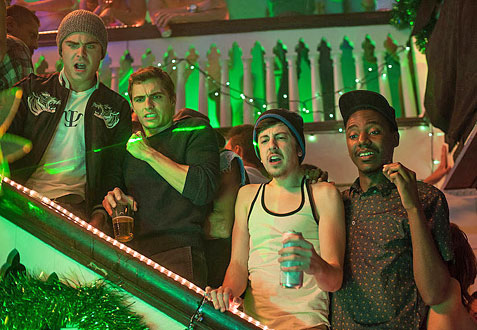 Your college years might have been the best years of your life, especially for those who were members of a fraternity or a sorority where brothers and sisters became part of a network that extends beyond college life and even across the country. Belonging to a fraternity or sorority affords its members the opportunity to develop life-long friendships, attend parties and dances, raise money for charities, and appreciate the importance of the symbols your membership invokes. Paddles branded with wooden Greek letters for sororities and fraternities represent the membership of the brotherhood or sisterhood organization.

Many movies and films have been made over the years portraying sorority and fraternity life in different genres. Many are comedies and some are horror films.

The movie “Neighbors” is a comedy about new parents who are enjoying their grown-up existence in the new home they just bought. They are horrified when they learn that a fraternity has moved in next door. They start by trying to be cool in an effort to get along with their new neighbors, but the late-night antics of the fraternity members get in the way of their new life with a new baby and they end up in an escalating war of stunts.

Black Christmas is a horror film about a group of sorority sisters who receive mysterious and anonymous phone calls. One of the sisters initially engages the caller until the caller becomes threatening. As sisters go missing and are murdered, they begin to realize there is a serial killer on the loose but they don’t realize just how close the killer is to them.

Legally Blonde is a movie about a sorority called Delta Nu. Reese Witherspoon portrays Elle Woods. Elle is best known for her love of anything pink, her perfect grade point average, and the advice she gives out to others regarding fashion, which was also her major. She gives the appearance of being a dumb blonde when in reality she was actually extremely bright.

Perhaps the most well-known comedy about fraternities is the raunchy Animal House starring John Belushi produced in 1978. The story involves socially inept freshman who unsuccessfully try to pledge the snooty Omega Theta Pi House and end up in the notoriously rowdy Delta Tau Chi House. The movie goes into the antics of the fraternity members as they fight with the snooty Omegas and an uptight dean who wants to get their charter revoked.

Revenge of the Nerds is a satire about nerdy geeky college students in their freshman year at college. They are evicted when the football players belonging to Alpha Betas take over their dorm after having recently accidentally burned down their own fraternity house. This group of misfits decides to start their own fraternity and decide to plot their revenge on the jocks who enjoyed humiliating them. It becomes a battle between the brains and the brawn while the nerds carefully engineer their revenge.

Filmed in 2009, Sorority Row is a horror film about a group of sorority sisters. One of the sisters discovers that her boyfriend is cheating on her and devises an elaborate get-even prank that goes terribly wrong. When one of their sisters dies, they try to cover it up and end up being stalked by a serial killer who wants to get revenge on each of them one-by-one.

Sorority Boys is about three friends living in a frat house who are falsely accused of stealing money for their annual cocktail cruise and thrown out of their dorm. In an effort to secure their future and to clear their name, they decide to dress up in drag and pledge a sorority where the girls are known as the “unattractive” ones. It was supposed to only be for one night but ends up lasting throughout the semester while they try to prove that they didn’t steal the money. They learn valuable and hilarious lessons about themselves, females, and how they treated these same girls.

Sorority Wars, a Lifetime movie that aired in 2009, tells the tale of sorority rivalry over recruits. It is also something that actually does happen in real life between sisters of rival sororities. The movie is about Sara and Katie who are best friends until they join different sororities causing a rift between them. The story involves a full out war between the Deltas and the Kappas rife with catty remarks and cat fights.

Movies plots that are created about fraternity and sorority life are enjoyed by so many because they can relate to their own experiences of their days in college.