Trending
You are at:Home»Vices»Drink of the Week: The Curse of the Aztec Toddy 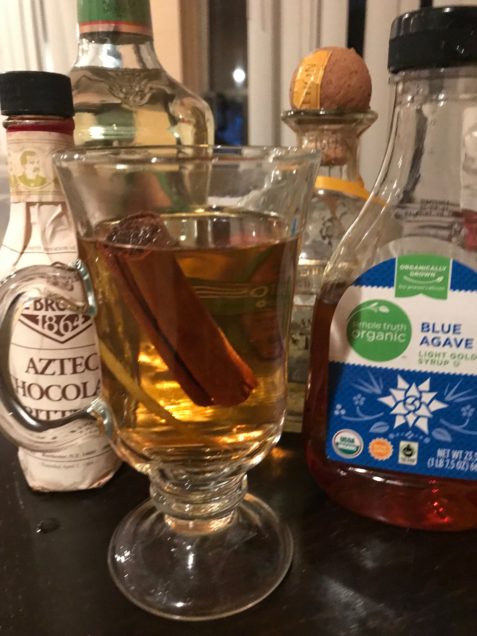 We’re enjoying a brief pause in the weeks long  cold snap here in Greater El Pueblo de Nuestra Señora la Reina de los Ángeles, but the chill and the rain will be back the day after this post goes live. So, I’m following up last week’s very standard, but very good, bourbon toddy with something I came up with that has a touch of Greater Aztlán to it. You can accuse me of doing some post-Oscar  cultural appropriation by cashing in on the enormous Mexican contribution to worldwide food and drink. However, if you could see my bank account you’d know that I’m not cashing in on very much of anything.

Nevertheless, I’m quite proud of my very modest toddy variation, that I think brings a delicious extra richness to an extremely old cold snap antidote.

The Curse of the Aztec Toddy

Boil four ounces of water — perhaps by sticking your coffee or tea cup in the microwave, which will keep your drink hotter longer. Add the syrup, bitters, and tequila. Stir. Toss in the cinnamon stick and lemon twist and sip carefully. It probably won’t be excessively hot but, when your messing with anything remotely Aztec, you can’t be too careful.

I’m not sure where I got the idea of using the Mexican chocolate bitters , other than simply trying to build on my south of the border theme, but it’s resulted in a drink I personally kind of love. It’s got a boozy richness with an herbal note or two and a subtle but very rich back-taste of spicy chocolate. It might remind you of a delicious chicken mole.The cinnamon stick is a big help in bringing up the spicy flavor, by the way.

I tried this with both value priced Hornitos Reposado and more pricey Roca Patron Reposado. The former was really very good, but the latter was kind of amazing, the smoothness of the Patron allowing the chocolate undertones to really do their thing. I’d guess that most reposado tequilas would work just fine in your Aztec toddy, though I do like Hornitos a lot at its price point. I also know for a fact that you should probably stir clear of even good white tequilas with some sweetness to them for your Aztec Toddy. I tried it and it it was kind of a big nada. This one needs the fullness of a reposado or its barely worth trying.