Trending
You are at:Home»Vices»Drink of the Week: The Scofflaw 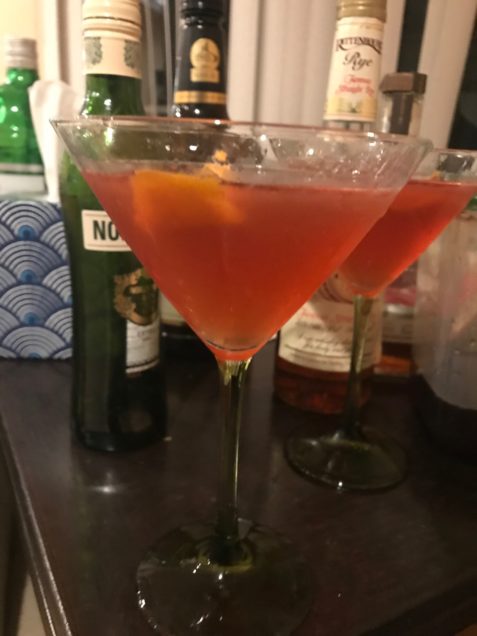 Last week, I proudly obeyed the rule of law. Now, I present you with a true cocktail classic inspired by contempt for it. Naturally, it comes from the prohibition era, when respect for the law was almost as at low an ebb as it is today.

The Scofflaw was invented circa 1924 at Harry’s Bar in Paris and was actually named for a word intimately associated with the hated 21st amendment to the U.S constitution. As per the mighty Wikipedia, “scofflaw,” which means anyone who flagrantly  disregards a law, was actually coined as part of a contest to come up with a word for the millions of Americans who not only continued to drink after the arrival of prohibition, but often did so with additional gusto, notwithstanding the occasional poisoning.

The contest was actually sponsored by an anti-booze banker who, I imagine, wanted to heap scorn on the lawless masses though he probably just made those proud lawbreakers all the prouder. The prize was $200.00 in gold. No word on whether or not the two winners, who both entered the same word independently, used it to finance a bender.

It’s on that cynical note that I’ll present a danged good cocktail that will may not induce lawlessness in most cases, but perhaps some contempt for lesser drinks. If you have more than two Scofflaws, however, it could easily induce contempt of yourself. It’s a tasty beverage, but not one to be trifled with.

Combines all the ingredients but the garnish in a cocktail shaker with lots of ice and shake with contempt for the near-frostbite level of coldness I want you to achieve in your shaker. Strain into a very large cocktail glass, add an orange twist if you’ve got it, and sip. Contemplate how it is that sometimes the only way to deal with a problem is to give into it just a little

This is one of those drinks where everyone seems to have a different preference when it comes to the proportions. I first tried this with 3/4 of an ounce of both the grenadine and the lemon or lime juice. It was fine but I didn’t really think the flavor was good enough to justify the calories in all that grenadine, which is a bit like simple syrup on steroids. (Simple syrup is equal parts sugar and water; grenadine is equal parts sugar and already quite sweet pomegranate juice.) So, I settled on a half-ounce of each, which I found to be a satisfying balance. If it’s all a bit much for you, there are many relatively petite recipes out there which call for only 1 1/2 ounces of whiskey.

I should add that, while lime juice and lemon juice are both great, they are not the same. I sense that mileages vary but, to my tongue, lime is slightly less sour than lemon. In any case, the drinks seemed to me slightly less balanced in flavor when I used lime juice, so I have a slight preference for lemon juice here.

Finally, regarding brands, I used both Martini and Noilly Pratt Extra Dry for the rather healthy serving of vermouth. I usually prefer not-so-extra dry vermouth, but I think it’s probably ideal for the Scofflaw. There’s enough going on in this one.

Of course, your choice of whiskey is key here.  I used 100 proof Rittenhouse, 90.4 proof Woodford, and, merely 80 proof Canadian Club (which is considered rye in Canada) for a mellower, lighter flavor. All were very good. Some recipes say its okay to use bourbon as well as rye or Canadian whisky in your Scofflaw, but I see no evidence of that. On my one attempt, it was surprisingly disgusting. Bourbon is sweeter than rye, so maybe if you adjust the grenadine it could work, but I wasn’t particularly motivated to try.

Finally, I couldn’t resist continuing my ongoing noble experiment comparing my super-easy homemade grenadine versus the cherry juice and pomegranate Master of Mixes, which I’ve been relying on for years. I have to say that both were good., but the presumably less gourmet store bought choice produced a slightly cleaner flavor that I appreciated. Sometimes disobeying the cocktailian laws  can sort of pay off.