Trending
You are at:Home»Vices»Drink of the Week: The Blue Moon 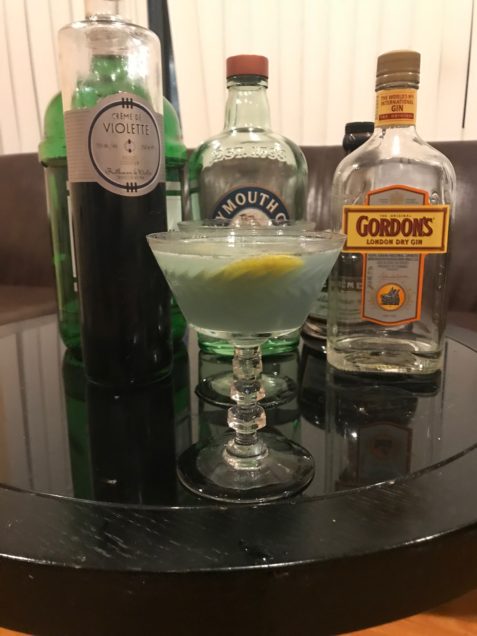 According to Google, the term blue moon refers to two things: a second full moon in a single month or a moon that actually looks blue “owing to smoke or dust particles in the atmosphere.” Regarding the latter, I’ve lived in the smog capital of the United States for nearly all of my not so short life and I’ve never seen an actually blue moon. While the former type blue moon occurs fairly rarely — i.e., once in a blue moon — the world from L.A. and New York to London, Tokyo and Australia recently witnessed something called a “super blue blood moon” which is almost as cool looking as it sounds. All of this is fortnight old news and has pretty much nothing to do with how I ended up with our first DOTW for February of 2018.

Here’s the deal. Having finally spent some $60.00 to obtain both Creme Yvette and creme de violette (Rothman and Winter) so I could do last week’s unexpurgated Aviation, I set about finding other drinks containing these rather esoteric liqueurs. I found the Blue Moon, which is essentially the Aviation, minus maraschino and with a bit more of the liqueurs containing the flavor of violet petals.. It seemed like a good opportunity to explore the flavors of the Rothman and Winter creme de violette which is delicious on its own but which I found problematic in the Aviation, except in very small amounts. Finally, I really like the idea of a blue drink made without blue curacao. Talk about something that happens rarely.

Combine the liquids in a cocktail shaker with plenty of ice. Shake very vigorously and strain into a not too small cocktail glass. Contemplate life’s truly rare events. I’d give you an example but they occur so rarely I can’t actually think of one right now.

I should start by saying that my recipe differs slightly from most of the ones you’ll see online. Those are probably taking their cue from the prescription by Ted “Dr. Cocktail” Haigh in the 2009 edition of his hyper-influential “Vintage Spirits and Forgotten Cocktails.” He, in turn, credits it to a little known 1941 tome, “Crosby Gaige’s Cocktail Guide and Ladies’ Companion.” That version calls for just half an ounce each of creme de violette and lemon.

My version differs because, like last week, I was detecting an unpleasant acrid edge that seemed to be resulting from the unharmonious combination of I-don’t-know-what flavors in the gin and the creme de violette. Still, I couldn’t really reduce the liqueur unless I was going for an ultra-tart flavor, which isn’t really my thing. I had a hunch that boosting both the juice and liqueur might do the trick, and it did. The extra lemon juice seemed to lesson or even eliminate whatever it was that was bothering me.

I was actually concerned that this gin/creme de violette combo thing might be one of those odd genetic taste perception issues, like the quirk which makes cilantro taste like soap to many people, and the one which makes both saccharin and stevia taste unpleasantly bitter to me. However, a cocktail savvy friend of mine came over and confirmed I wasn’t imagining things. We also gave it the Blue Moon a go with Creme de Violette which, rumors to the contrary notwithstanding is not blue at all, but kind of a pinkish purple and does not make a blue drink at all. It was…okay.

This is the part where I usually go on about brands, but I want to keep it short. Tanqueray was fine, but not ideal. I think the relative sweetness of Plymouth Gin and the relatively bland Gordons seemed to give the creme de violette a little more room. You might not want to drink a Blue Moon every night, but it’s good every once in a….while.