Trending
You are at:Home»Vices»Drink of the Week: The Aviation Cocktail (a la Ennslin) 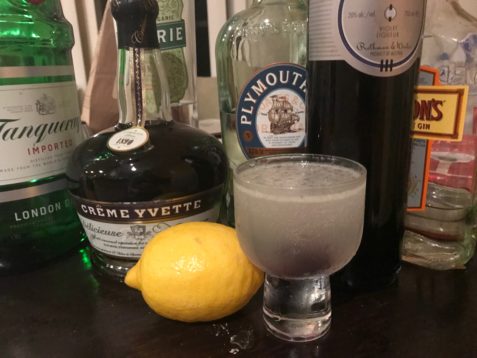 I could try to tie in today’s drink to the Superbowl but, honestly, I can’t. However, if you’re having the most fancy game day party in history, I certainly wouldn’t stop you from giving this unabridged classic a go.

In the still very early days of DOTW, I went at a drink that, while still obscure to a lot of people, seems to turn up at maybe half the bars that aspire to make classic cocktails. Most go with a variation of the expurgated recipe I went with in 2013. Now, however, I have finally bit the bullet and paid the price of not one but two fancy liqueurs needed to make a truly compete Aviation — the World War I era drink attributed to author and bartender Hugo Ensslin.

The shortened version featured in 1930’s “The Savoy Cocktail Book” is believed by some to be the result of an editorial mistake, not a taste preference. Also, some speculate that the liqueurs weren’t that much easier to get hold of in 1930 than they were just a few years back. In any case, this week you”re getting  two recipes for the price of one. I’ll explain why after the asterisks.

The Aviation Cocktail (a la Ennslin, more or less)

Combine the liquid ingredients in cocktail shaker and agitate vigorously. Sip and contemplate just how insane you have to be spend as much as $80.00 on two 750 ml bottles you’ll be imbibing mostly in extremely small amounts

The reason I have to give you two somewhat different recipes this week is that Creme Yvette and Rothman and Winter’s Creme de Violette turn out to be quite different animals, despite the fact that cocktail recipe writers seem to use them interchangeable and both of them contain violette flavor.

Creme Yvette is perhaps the more famous name. However,sipped straight, I’m really not a fan. To my taste buds, if you added a bit of viscosity and a touch of eucalyptus, you could pass it off as Robitussin. I’m serious. However, when blended with the other ingredients, it really does bring some welcome complexity and sweetness, while imparting an agreeable pinkish hue to the drink. So, worth the purchase if you’re a cocktail nutter like me.

That was not enough for me, though. Curiosity drove me to also purchase a bottle of the more purely floral creme de violette. On its own, I rather like this liqueur. Counterintuitively enough, however, using a quarter ounce, half a tablespoon, or even just a teaspoon in my Aviations resulted in an acrid (i.e., not so good) flavor. It was especially the case when I tried it with Hendrick’s Gin, which I love in most drinks. I’ve never used peroxide in a cocktail, but this is as close as I want to get.

I returned to the many recipes I found online and noted that most of them called for very small amounts of the creme de violette and somewhat more of the maraschino. And so I went down to half a teaspoon of the flower juice and added an additional quarter ounce of the bittersweet cherry liqueur It was now a somewhat tart but altogether pleasing beverage that wasn’t as blue as I’d been lead to believe but was a very nice silver color.

As for brands, I had the very best results on both versions of the complete Aviation with Plymouth Gin, which is ever so slightly sweeter than standard London dry gin. I had almost as good results with Tanqueray and Prairie Organic. I never got around to Gordon’s, but I suspect the relatively laid-back florals in it would play nicely with the flowery flavors in an unabridged Aviation.

And, because a sure sign of cocktail madness is having more than one brand of marschino in the house, I tried this with both Luxardo and Maraska, which is a tad less bitter. They both resulted in equally good drinks.

Just don’t overdo it on the creme de violette and you can bet your Aviation won’t crash and burn.