Trending
You are at:Home»Vices»Drink of the Week: The Jack Rose (revisited) 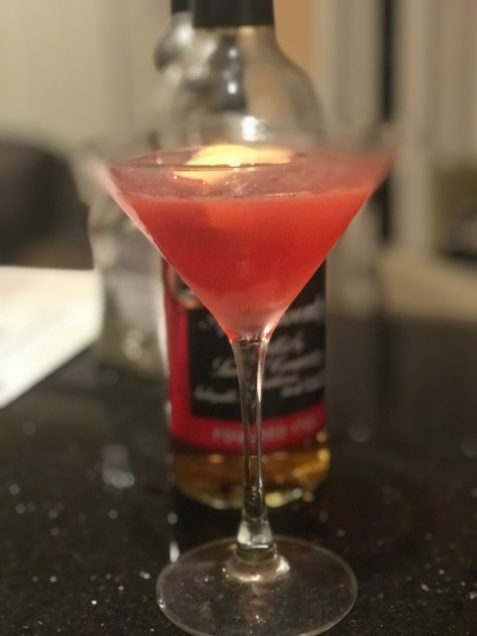 When last we met I was nearing neak apple brandy. Over the last couple of months, I’ve managed to go through five bottles of different varieties of Laird’s straight American brandies and French calvados. With so many bottles a hair’s breadth from meeting their final reward, it was time for a break lest. However, I determined to go out with the best known apple brandy cocktail of all.

As a somewhat less seasoned booze blogger way back in the more innocent days of 2013, I was impressed by the Jack Rose, However, back then even the Southern California big box liquor stores only featured  Laird’s good but adulterated Applejack and a few brands of calvados. Since I’m not the type to go the mail order route, I only used apple jack and calvados on my first go round. As the cocktail renaissance continued to grow in strength, however, I started seeing Laird’s 100 proof Bonded Straight Apple Brandy at my local booze emporiums, and then began using it in quite a lot of cocktails. More recently, we’ve seen a new product Laird’s is marketing as Straight Applejack 86 which is a somewhat less expensive, sweeter apple brandy that is probably closer to the applejack Ernest Hemingway was imbibing when he famously mentioned the drink in “The Sun Also Rises.” I

Anyhow, going back to this once ubiquitous cocktail seemed like a good way to wrap up my wintery exploration of a lost cocktail classic that may be available at your local quality booze bars.

Combine the ingredients in a cocktail shaker with lots of ice. Shake quite vigorously and strain into a chilled cocktail glass. Wonder if you’ve done it quite right.

My re-examination of the Jack Rose was a lesson in the two most important differences between a great, good, mediocre, and just plain horrible drink: proportions and ingredients. My choices of apple brandies were the same as last week’s and, really, all very good products, though you’ll definitely get more flavor with calvados — which I’ve warmed up to over the years — or the higher proof Laird’s products. I used both fresh lemon and lime juice. I slightly prefer lime in this drink, but they’re both just fine here. Mixing lemon and lime is not a bad idea, either. This time, however, it mostly came down to the grenadine.

Prepare for a digression. So, it’s conventional wisdom that any cocktailian worthy of the name will always insist on home made grenadine. This makes some sense, because it is generally defined as a syrup made from pomegranate juice.  In real life, however, most of the available pre-made products have about as much pomegranate juice as something that contains no pomegranate juice. They are rich, however, in high fructose corn syrup and unknown flavors and coloring. You can also find some high end commercial products which might set you back about $15.00.

Being the stubborn, cheap layabout that I am, I saw no reason to either go through the allegedly easy recipes that I saw online, which typically involve juicing pomegranates (I’ve done it; it’s not easy). Then there’s heating the juice  up so you can dissolve fancy turbinado/raw/demerara sugar. Sometimes they even want you to do reductions. No. No. No. I’m sure these result in really outstanding syrups that might make for celestial beverages, but I repeat: no.

My lazy and cheap solution was to use Master of Mix’s grenadine, which might contain  disreputable corn syrup but which also boasts the juice of actual cherries and, yes, pomegranates. It’s worked  very well for me since I started writing these, and it costs about $3.99 at my local booze big boxes. Not bad.

Now, however, I was feeling a sense of disappointment. The Jack Rose just wasn’t coming together like a true cocktail classic ought to. It was then that I stumbled over, a number of less time-intensive grenadine recipes that suggested simply combining a decent commercial pomegranate juice with an equal measure of superfine sugar (aka castor or baker’s sugar) and maybe a bit of rose water and/or orange flower water.

My next steps were clear. I stopped by Whole Crunchy Millionaires and bought a sixteen ounce bottle of overpriced Pom GoodEnoughforBob. Once I got home, I emptied it int a large container and combined it with two cups of the easy dissolving sugar. I stirred it a bunch, added  both rose and orange flower waters for a bit of a flourish. (Some versions call for a tiny amount of vodka as well.) I stirred it some more and, sure enough, I had myself some very good grenadine. Very slightly grainy right at first, but immediately suitable for use.

To my surprise, my first Jack Rose with the mostly home made syrup was, to be honest, an enormous disappointment. The dreaded words “cough syrup” were heard from my in-house guinea pig. That version involved a half ounce each of lemon juice and syrup, which earlier in the week seemed to be the golden mean of tartness and sweetness, or as close as I was going to get, anyway. Stable genius that I am, it eventually occurred to me that my homemade pom-good-enough brew might be more legit in terms of pomegranate content, but it was probably sweeter than the Master of Mixes’s product.

With time and applejack running out, I took one last shot at a Jack Rose for the ages. I bit the sour bulllet and used a full ounce of lime juice to a mere half ounce of my home grenadine. I took a sip. It was the best Jack Rose I’ve made yet. The lime juice and the pomegranate nectar balanced each other in exactly the way they should and there was and extra bit of fruit in the drink for a more well-rounded flavor.

I definitely wouldn’t blame anyone who either shells out bucks for a high end grenadine or tries their luck with one of the better syrup brands Monin and Torani both have juiceless grenadines, and I imagine they’re probably okay because they’re stuff is usually good.  Nevertheless, if you really want your Jack Rose to sing like Ella, you know what to do.