Trending
You are at:Home»Vices»Drink of the Week: The Savoy Tango 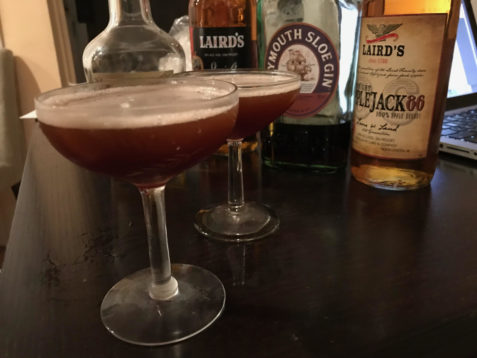 It takes two to tango. I have to resort to that wildly over-used cliche because this week’s drink is the Savoy Tango, presumably so named because it is comprised of  two evenly matched ingredients. It’s  also one of only three drinks in Harry Craddock’s magnum opus, “The Savoy Cocktail Book” to actually be named after the world famous high end lodging where Mr. Craddock tended bar. “This cocktail is a very great favourite at the Savoy Hotel, London, where it was invented,” he adds in a rare commentary below the recipe

Savoy Stomp proprietor Erik Ellestad, expressed some skepticism about whether it was really all that popular at the hotel bar when he wrote about this drink back in 2010. However, seven years back it was relatively challenging to find both of this week’s two ingredients in a drinkable form. Today, apple brandies both American and French-style are proliferating, and so are the numbers of quality sloe gins. (The crappy ones have always been with us, it seems.)

Finding just the right two brands to make the best possible version of our drink of the week seems like a worthy aspiration, though not one I’m certain to ever achieve. That being said, this drink really is a case of two great ingredients that go pretty good together.

Combine the two ingredient in a cocktail shaker or mixing glass and stir or shake, as you prefer. (Craddock says to shake this, and most of his other drinks; I lean slightly in his direction on this one.) Strain into a well chilled cocktail glass and toast the fruits of the earth that provide us with such our boozy bounty.

The Savoy Tango may have only two ingredients, but there’s a lot going on. There’s some sweetness it’s quite strong, and can get stronger depending on the proof of the apple brandy. The apple and berry flavors pair well, though the apple largely subsumes the berry, at least when the drink is at its best.

My brandies were Calvados Coquerel, Laird’s 100 proof Straight Apple Brandy and a very cool new product, Laird’s Straight Applejack 86, which is being billed as the return of the pre-prohibition spirit so prominent in so many of the lesser known cocktailian classics. The 86 proof Applejack is cheaper than it’s boozier brother, but still extremely flavorful. The reduced heat allows a bit more sweetness to come through. I used Plymouth Sloe Gin, and a lesser known expression from the Spirit Works Distillery up in Northern California.

Plymouth Sloe Gin remains the standard and worked in every iteration. Spirit Works worked very nicely with the 100 proof straight apple brandy but it has a slightly medicinal quality that, for whatever reason, was strangely amplified by the straight applejack. Blech.

Otherwise,  I was varying degrees of happy with pretty much every combination I tried. As you might expect, the calvados version was the most mature and low-key combination and the 86 proof applejack was the sweetest and most user-friendly combineed with Plymouth, in contrast to the Spirit Works iteration. The interplay between the very strong 100 proof brandy and the the bittersweet sloe gin was definitely the most austere but maybe also the most fascinating,  The Savoy Tango might not the smoothest dance, but it’s definitely memorable.