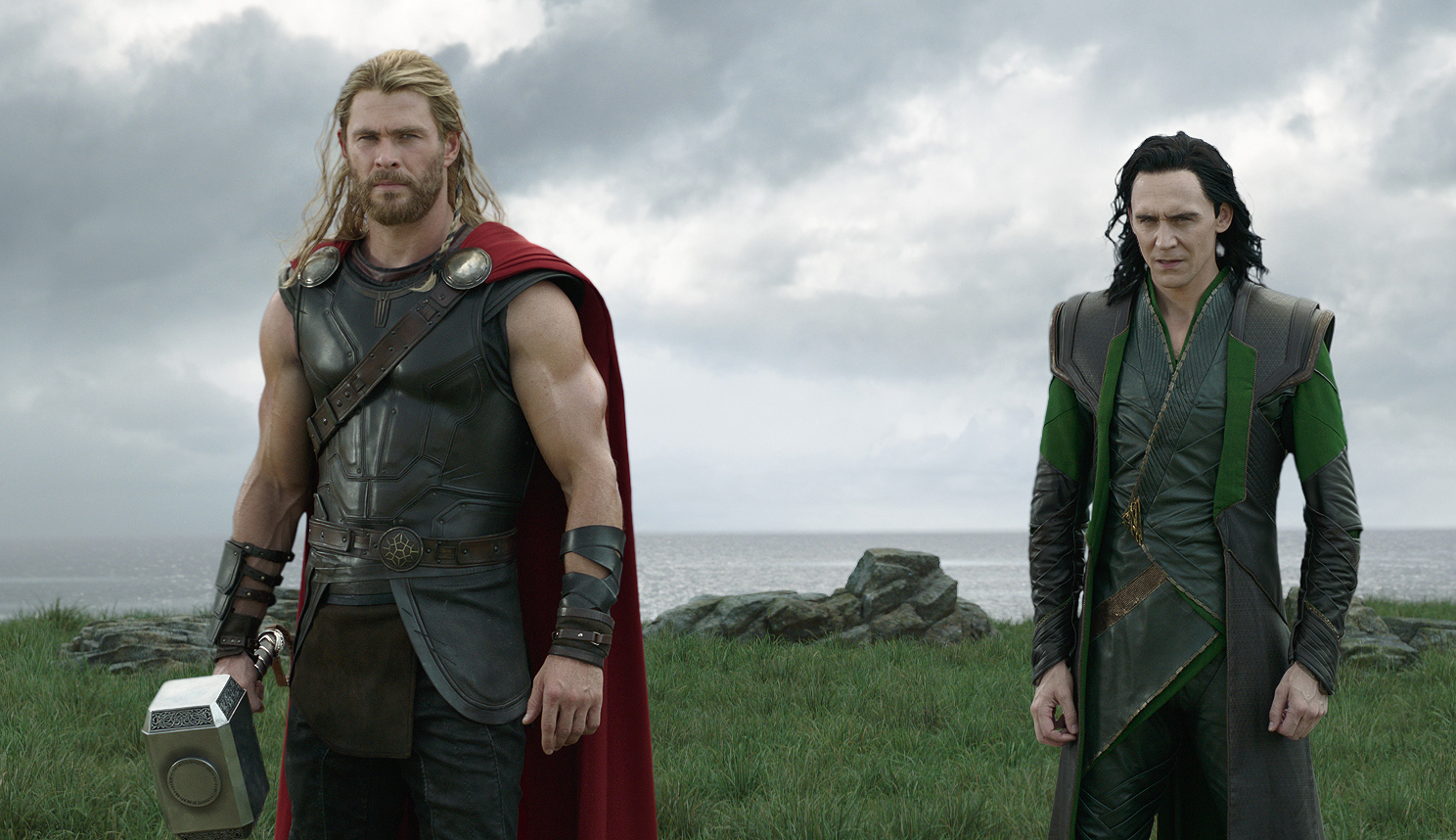 When word first started circulating that “Thor: Ragnarok” would have a much lighter tone than its predecessors, that seemed strange for about three seconds, and then one remembers “Thor: The Dark World” and welcomes the new approach with open arms. The end result is indeed heavier on laughs, but it also sports one of the higher body counts in the Marvel Cinematic Universe. One wonders which came first in the story development; were the laughs added as a spoonful of sugar to help the (violent) medicine go down? It would not surprise us in the slightest if that were the case.

Upon discovering that a presumed-dead fire beast intends to launch the prophesied Ragnarok, which will lead to the destruction of Asgard, Thor (Chris Hemsworth) returns home and finally uncovers the ruse that has been in place since the end of “The Dark World”: King Odin (Anthony Hopkins) is actually Loki (Tom Hiddleston) in disguise. Loki confesses that he has hidden Odin on Earth, and when Thor and Loki visit him, Odin reveals that his first-born child is not Thor, but Hela (Cate Blanchett), the Goddess of Death. Hela has returned to claim her rightful place on the throne, and while ascending to Asgard, she sends Thor and Loki hurtling across the universe.

The two land on Sakaar, a landing spot for space junk (the sky above the planet is Wormhole Central). Thor is captured by Scrapper 142 (Tessa Thompson), who sells him to The Grandmaster (Jeff Goldblum), an Elder of the universe and ruler of Sakaar. The Grandmaster pits Thor against his champion gladiator for sport. His champion gladiator is, yep, the Hulk (Mark Ruffalo), who has been on Sakaar ever since the events of “Avengers: Age of Ultron.” Thor tries to convince Hulk and Scrapper 142, who is actually the sole survivor of the Asgardian female battalion Valkyrie (the others died battling Hela), to join him and save Asgard. Or at the very least, join him in an effort to get off that awful garbage planet.

While the ‘A’ story of the script (escaping Sakaar) is what people will remember and enjoy most (and rightly so), the writers planted something curious into the ‘B’ story (Hela conquering Asgard). ‘History is written by the winners’ is a recurring theme in the “Thor” films, and this time around, they expose the ugly truths behind Asgard’s long reign of success, not unlike our country’s relatively recent re-evaluation of one Christopher Columbus. “Where do you think all of this gold came from?” Hela says to Thor at one point. Which, in Asgard, is a fair question. There is not a lot of square footage, and to think that a small land inhabited by gods is also teeming with gold, well, that’s just being greedy.

Director Taika Waititi, who had never made a film that earned more than $6.3 million worldwide (!) before taking the reins of “Thor: Ragnarok,” which earned $109.1 million in its opening weekend overseas (!!), turns out to be an inspired choice. The big clue in his resume is his work on “Flight of the Conchords,” a show that uses dick jokes to set up several far smarter, subtler jokes (and sometimes, more dick jokes). Waititi also turns in some deft comic support as the rock being, Korg.

His ace in the hole, though, is the top-notch cast of Oscar winners (Hopkins, Blanchett) and critical darlings (Hiddleston, Goldblum, Ruffalo, Idris Elba, Benedict Cumberbatch and let’s add Thompson as the lovely badass, Scrapper 142/Valkyrie), each of whom knows exactly what this material needs. While the vibe is different than the previous “Thor” movies, the characters still stay in their lanes, and that’s a crucial distinction. No one is looking for Hemsworth to pretend he’s a clown, but he and his cast are well prepared to say a line with the bone-dry delivery that was intended.

As fun as the movie is, though, it’s a bit slight. It takes place (mostly) in space, so it will never have the real-world stakes that “Captain America: The Winter Soldier” or “Captain America: Civil War” boast in spades, especially when the film involves fire demons and the goddess of death. If ever there was a Marvel film to fly the fun flag, this is the one, particularly when it follows right on the heels of “Guardians of the Galaxy Vol. 2.” Had they gone for something darker, it would have been insufferable.

“Thor: Ragnarok” is proof positive that in the Marvel Cinematic Universe, there are stepping stones and there are bridges. The “Thor” films, his top-level Avengers status be damned, will forever be stepping stones. A couple of small but vital plot points are moved forward, but the events of “Ragnarok” have little to no impact on the other Avengers, whereas the last two “Captain America” films affected every single one of them. They can’t all be bridge films, of course, but Marvel executive producer Kevin Feige would be wise to make sure the stepping stones don’t sink beneath the surface.