Trending
You are at:Home»Vices»Drink of the Week: The Somewhat Improved Mazel Tov Cocktail 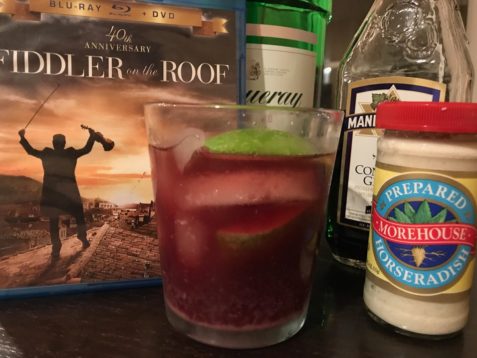 I’m breaking my recent string of posts failing to properly acknowledge holidays with a drink inspired by the unlikeliest of boozing occaions: Yom Kippur, which begins tonight at dusk. It’s the 24 hour period when all healthy Jews 13 and over are supposed to contemplate their sins and are not supposed to eat or drink anything.

This might seem like an odd inspiration for a cocktail blog post but, happily, we Jews are not completely insane. When the holiday ends tomorrow night, observant Jews — and not-so observant Jews with family in town — will be partying down with big plates of roasted brisket and chicken with all the trimmings. As for beverages, any Jewish religious celebration involves the ritual drinking of wine, and it can’t be just any chianti or cabernet. It must be wine that has been prepared in a manner that is deemed kosher by whoever it is that deems wine kosher. While there are some high quality kosher wines out of Israel and France, the traditional choice for most American Ashkenazi is the much maligned, sweetened concord grape wine produced most famously by kosher food purveyor Manishewitz.

In my quest to find an appropriate cocktail for my people, I stumbled over a number of recipes calling themselves the Mazel Tov Cocktail, mostly inspired by an amusing pre-election verbal gaffe made by Donald Trump surrogate Scottie Nell Hughes. In the course of criticizing Hillary Clinton supporting rap superstar Jay-Z,  she malaproped herself into “Mazel tov cocktail” instead of “Molotov cocktail.” The phrase has also found its way into two entries, one clever, one gross, in the ever-raunchy Urban Dictionary, which I’m guessing were made up by the jokesters who posted them.

Most of the recipes sounded pretty good. (I might give this one a shot later.) However, the one I chose, mainly because it was the easiest, was published at Food Republic exactly six years to the day prior to today’s post. While that date might have made it sound like pure kismet, the recipe was mainly just kind of blandly sweet and made one think not of the unpotable cocktail named for (but not by) Mr. Molotov, but Snoop Dog’s Gin and Juice. As any oenophile will tell you, the flavor of Manishewitz is not really like wine at all, but more like alcoholic Welch’s. However, I don’t necessarily say that like it’s a bad thing. After all, it’s the first alcoholic beverage I ever consumed and it still tastes okay to me but, oy vey, is it sweet.

And so I arrived at a couple of additional ingredients that add some slightly sour, bitter, and pungent/hot flavors. I believe, the result at least partially brings Manishewitz up town and makes the Mazel Tov a proper cocktail. It’s still very sweet, though.

Start with a double rocks glass. Put a sour apple slice in the glass and muddle it, though you probably won’t be able to smash it completely. Add all of the other ingredients, stir to dissolve the horseradish, add ice, and stir again more vigorously. Next, say mazel tov to congratulate yourself for making a weird drink that’s not quite a shanda for the goyim.

The idea of adding horseradish was actually inspired by the moment in the Passover Seder when one mixes the “bitter herbs” with charoset, a traditional sweet snack comprised usually of apple, honey, and sometimes nuts to represent  the sweetness of freedom and the bitterness of the Jews’ enslavement by the Pharaoh.  Though I wasn’t in love with it at first, over the decades I’ve learned to enjoy the odd combination of flavors. Here, the not so much bitter as pungent herbs definitely saves the drink from being insipidly sweet, but I wouldn’t blame you if goosed up the gin and took it easier on the alleged wine.

Moving on, I think I slightly prefer using celery bitters here over the grapefruit, though both are fine. I like the crispness of the celery flavor, which reminds me more than a little bit of Dr. Brown’s  Cel-Rey Tonic, a really tasty Jewish-American soda, which is sort of like ginger ale, but celery flavored.

As for gin, I didn’t really have a chance to mess around with different brands…it took long enough to figure out how to save this drink from sweet oblivion. I stuck with Tanqueray, but I think most other standard London dry gins, emphasis on the dry, would work here.

That’s about it. I don’t know if anyone reading this will be fasting tonight and tomorrow — the last time I did Ronald Reagan might have been president. You see, my family were the kind of Jews who ate bagels and lox and ham and eggs on Christmas morning and only got near a place of worship on Rosh Hashanah, Yom Kippur, weddings, and bar mitvahs. Now, naturally, I’m pretty much a total heathen.

Nevertheless, If you are fasting, I wish you an easy fast. For the rest of us, please allow me to wish everyone, Jewish, gentile, and undecided L’shana tovah, a very good year. It’s been tough so far but, you never know, there’s a small chance we could beat the odds.