Trending
You are at:Home»Vices»Drink of the Week: The Canadian Whisky Cocktail 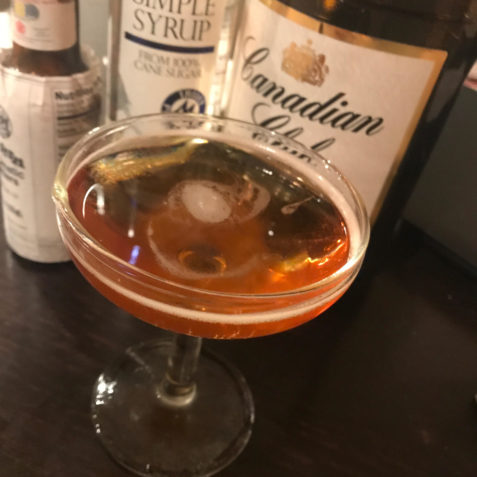 I love Canada, and not just because of the whisky and the great fries I had when I was there last. It’s not just SCTV and The Kids in the Hall or that Montreal is the most beautiful city I’ve ever been to. Maybe it’s that famous niceness. While I’m sure Canada produces its share of sociopaths, narcissists, and garden variety jerkwads, Canadians really do seem nicer and more polite than we Americans. Moreover, on a national level, our maple leaf bearing friends represent something more important than being nice: human decency.

NPR and other news sources have reported on how Ottawa brought 31 LGBT individuals out of Chechnya and have allowed them to become legal Canadian residents. In an era where the two most powerful men in the world both deride human rights and argue for a policy of national selfishness and brutality, seeing a government break norms because it’s actually the right thing to do moved me to resolve that  I would make a cocktail that was in some way Canadian. It was harder to find a good one that we haven’t done before than I expected, but the Canadian Whiskey Cocktail is an almost-variation on the original cocktail that’s as good as it is simple.

Combine the ingredients in a cocktail shaker or, perhaps, a mixing glass. Add ice and shake or stir (I say shake) the contents and strain into a well chilled cocktail glass. Sip and contemplate the importance of fighting meanness in the world.

I have a deep allegiance to Canadian Club, so I pretty much stuck with that. I actually contemplated purchasing some Crown Royal, but I’ve been spending a lot of money on booze for these columns lately, and I can pretty much tell you in advance it will taste about the same, maybe a hair smoother. I love CC because, if you’re in California, anyway, you can get a big ol’ 1.75 liter bottle for an absurdly low $15-16 and make yourself many, many mighty fine cocktails. Canadian whisky tends to be downgraded by cocktail snobs as “the vodka of whiskey” but I say fie upon that.

I did, however, experiment with some of the excellent rye made by Woodford, which is probably not too different from some of the newer Canadian expressions that can be legally called rye here in the U.S., It was fine, if a bit more astringent. Certainly feel free to try this one with whatever kinds of whiskey you have around. It will probably work. I also experimented with using Fee Brothers’ aromatic bitters but, the notes of cinnamon dominated and kind of took over the cocktail. Stick with the more subtle flavors of Angostura for this one.

All in all, while this is really pretty much just an Old Fashioned served up (i.e., not on the rocks), I enjoyed grooving on its simplicity. The original recipe — this is another little known entry in The Savoy Cocktail Book from 1930 — didn’t call for any garnishes, and I saw no reason to add them. All on it’s own, it’s a cocktail that practices some much needed simple common decency and kindness on a drinker’s taste buds.