Trending
You are at:Home»Vices»Drink of the Week: The Millionaire (Another One) 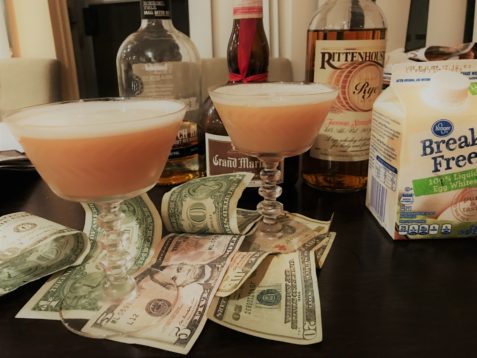 Never fear, however, because this is a completely different drink from last week’s delightful frosty beverage. We’re going from dark rum to rye whiskey and throwing in one of my very favorite non-alcoholic ingredients: egg white! There are multiple versions of this drink running around online, including a very booze-forward recipe by uber cocktailian David Wondrich, but I’m pretty fond of what I’ve come up with by doing as some other versions do, and doubling up on the sweeter ingredients. See what you think.

The Millionaire (another one)

Combine the ingredients in a cocktail shaker. If you’re using egg white from an egg, “dry shake” the contents without ice to emulsify it. If you’re using packaged product like I do, you can skip this skip.  Next, add ice and shake as vigorously as if you were being paid a millionaire’s salary to do so. Strain into a well chilled, and very large, cocktail glass, or two smaller ones. Sip and consider that, while you may not be wealthy, you’ve got your health. If, sadly, you haven’t got your health, consider that you nevertheless have a very nice drink.

I actually tried the Wondrich recipe first, which called specifically for 1/2 ounce of Grand Marnier, which is considered a type of curacao but which is often treated as an unique  ingredient unto itself. It also featured just a dash of grenadine, which I interpreted as quarter teaspoon. In any case, it was very, very dr for my taste — not bad, just overly severe. My sweetness-loving in-house guinea pig didn’t love it, but was able to get it down and appreciated that it was sort of balanced.

Next time, however, I doubled up on the Grand Marnier and grenadine. The result was a still very well balanced, but also much more sweetly inviting beverage. It worked even better, I thought, using Pierre Ferrand Dry Curacao (which, the name notwithstanding, is still fairly sweet). If you’re even further from being an actual millionaire than I, don’t worry. The less upmarket Hiram Walker Curacao also worked just dandy, though it was notably sweeter. The test subject loved that version and so did I, actually. However, when I tried boosting the grenadine up to an entire teaspoon with Pierre Ferrand, I found the result a bit over sweet, but my test subject approved thoroughly of the result. I definitely would not try that if you’re using the Hiram Walker and you don’t want to go into a sugar coma.

My ryes this time included Woodbridge, which I love but which is a little bit sweeter than other ryes, so you may want to adjust your proportions accordingly if you don’t want an overly sweet drink. Rittenhouse Rye and Rebel Yell Small Batch Rye, however, stood up to the other ingredients admirably. If you want to save some money on spirits, Canadian Club worked almost as well. (It’s a long story, but Canadian whiskey is actually called rye in Canada.)

One last thing. Many of the write-ups about this from years past bring up a certain well-known millionaire who is currently Peter Principling this country to the edge of a fascistic Lord-knows-what. Let’s not think about him lest we need two more of these. That’s important because this drink is pretty strong, especially with a 100 proof rye like Rittenhouse. It’s also a drink that’s easy to overdo as the alcohol flavors are muffled by the egg white and and sweeteners. I am guessing this is one of those prohibition drinks that was intended to cover up the flavor of bad booze. Sadly, there’s no way to cover up the taste of the billionaire boy king,though he’s obviously trying.

I prefer instead to think of the man they once called, the Millionaire, who has since come out as Michael Cudahy. Now a film composer, he was the outstanding guitarist and leader of the superb nineties Seattle-based lounge band, Combustible Edison. I met him once several years back when his name was apparently still unknown. When I asked how I was to address him, he said he preferred to be called simply “the Millionaire.” That might sound slightly affected, but it didn’t feel that way. It’s possible to be perfectly nice and just desire a certain mystique, I suppose.