Trending
You are at:Home»Vices»Drink of the Week: Golden Dawn 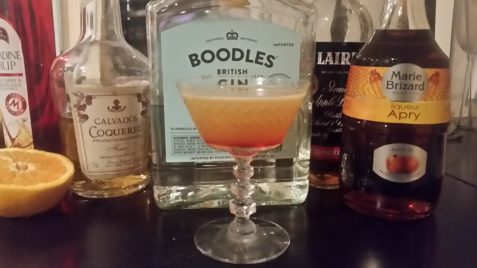 Today we’re featuring an obscure drink possibly named after an operetta that everyone seems to agree is really, really bad. You’re unlikely the see this masterwork performed, but there is, we’re told, a solidly psychotronic early pre-code, two-strip Technicolor talkie from 1930 of the same name, “Golden Dawn.”

The film — not one this movie maven has personally seen, yet — is apparently also quite something, in a super-racist MST3K kind of way. However, the great Ted Haigh appears to be mistaken in “Vintage Drinks and Forgotten Cocktails” when he says that one of the songs is called “Hymn to Domestic Violence.” He’s apparently referencing a ditty called “The Whip.” (The misconception may have started as a joking reference to the song by IMdB commenter Catmommie, writing back in 2001.) Haigh also gets it wrong when he credits the operetta to Rodgers & Hammerstein. It was actually  supposedly by Otto Harbach and his young mentee, Oscar Hammerstein II, years before he’d go on to worldwide fame with composer Richard Rodgers and such shows as “The Sound of Music,” “The King and I,” and the avowedly anti-racist “South Pacific.” The only problem with the the information I can dig up on all of this is that Hammerstein and Harbach were actually lyricists, so it’s anyone’s guess who the composer was. Perhaps the culprit preferred not to be named.

The drink “Golden Dawn,”in any case, is not something to be ashamed of, though you’d better have a sweet tooth. There are several different versions — and we may return to do one that sounds like it might actually be an improvement shortly. However, this is the one Mr. Haigh goes with, and I can see why a lot of people dig this award-winning mixed beverage.

Combine all the ingredients, save the grenadine and the de-stemmed cherry, in a cocktail shaker with lots of ice. Shake with great violence (but not domestic violence) and strain into a chilled cocktail glass. Add the stemless cherry and then drizzle roughly half a teaspoon or so of grenadine into the drink, but don’t stir. Consult your endocrinologist and sip.

This is a drink with a definite visual appeal, resulting from the combination of that stemless cherry and the grenadine, which settle at the bottom of your glass to create an alcoholically Homeric rosy fingered dawn. It also gets progressively sweeter as you work your way to the bottom. In my favorite attempts at this drink, it felt a bit like getting to the Tootsie Roll center of the Tootsie Pop, but with more fruit.

My brandies were Calvados Coquerel and Laird’s Straight Apple Brandy. My gins were Boodles, Gordon’s, and Prairie Organic. My apricot-flavored brandies were DeKuyper and Marie Brizard Apry (the brand specified by Ted Haigh). My orange juice was from a citrus fruit produced by Mother Nature, though Mr. Haigh says the packaged stuff is okay for this.

Ted Haigh also specifies calvados in his recipe, but adds that’s it about equally good to use applejack — a hard liquor that is often synonymous with American apple brandy, but then there is Laird’s Applejack, which is technically not a brandy but a sort of blended hard liquor. I didn’t have time to try that in this drink, but if it’s what you got in the house, I definitely wouldn’t discourage you from the giving the Golden Dawn a try. Still, cocktailians agree that the straight brandy is superior. (It’s also more expensive, of course.)

I will say that the choice of brands here are pretty decisive in terms of the beverage’s character. I preferred the results when I was using calvados. Being French, it’s a bit drier and more acidic compared to the more Bourbon-like sweetness of American apple brandy, and the results were notably more sugary;. I also noted that the Marie Brizard apricot brandy liqueur was arguably sweeter than the DeKuyper, though it is definitely the superior product if you’re drinking it straight.

While I was somewhat dismayed by the extreme sweetness of the apple brandy Golden Dawns, I found that adding some bitters helped a bit. On the other hand, while the American-made Prairie Gin is a perfectly good product, I got a slightly medicinal taste when I used it in combination U.S. apple brandy. However, my in-house guinea pig disagreed strongly. GP strongly preferred to sweeter flavor and actually found it less medicinal in flavor than the calvados variation. So, if you’re making this one for folks who might not be the biggest cocktailians, maybe go with the applejack and leave the calvados for yourself.

And now, if you need help sleeping, our moment of…something. In glorious black and white, for some reason.