Trending
You are at:Home»Entertainment»Movies»Movie Review: “War for the Planet of the Apes” 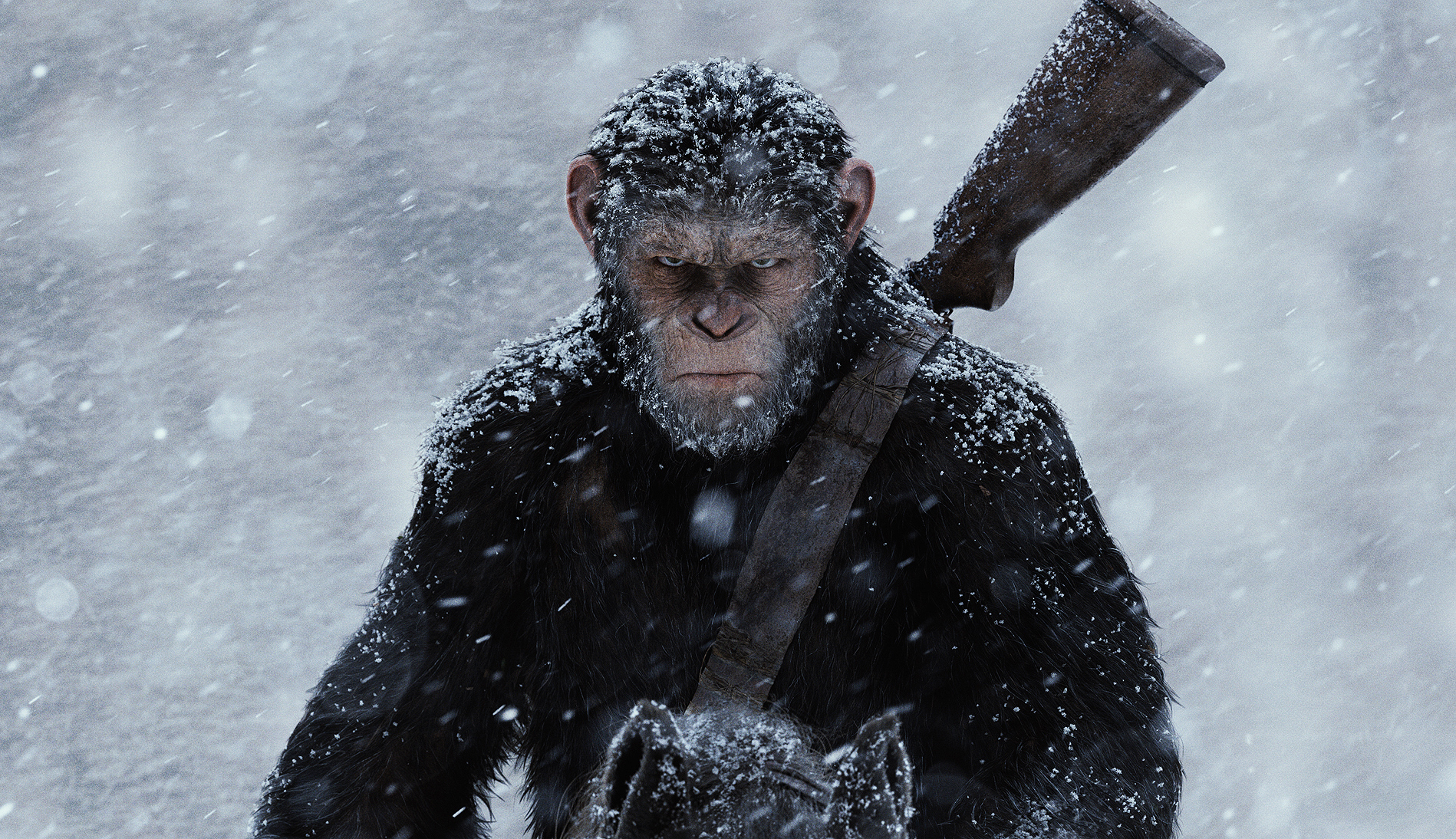 Where does true power lie: in the ability to dominate another or in the capacity to show mercy? Violence will always beget more violence, retributions occurring cyclically for years and generations to come. But when is it a necessary tool to acquire change? These are some of the pressing and weighty issues brewing in “War for the Planet of the Apes,” a film that has no right to be as heady or emotionally engaging as it is. The latest installment in the “Planet of the Apes” franchise (arguably the best series in cinematic history), “War for the Planet of the Apes” is concerned less with spectacle than it is with delving into how one defines humanity and what are the right paths to take in order to claim rightful equality.

Following the events of “Dawn of the Planet of the Apes,” military personnel pursue Caesar (Andy Serkis) and his crew of hyper-intelligent simians. Led by an intensely focused Colonel (Woody Harrelson), these soldiers see the ape threat as tantamount to humanity’s extinction and are willing to do whatever is necessary to wipe them out. They’ve employed some of their own evolved gorillas and chimps to aid them in their campaign, branding these animals with their insignia (the Alpha and Omega symbols), referring to them as donkeys, and forcing them to do manual labor in the betrayal of their own kind. Meanwhile, Caesar has become a general and arranges his forces in defense while looking for a new place where apes can live freely. After a horrific attack, Caesar and his closest allies set out to find the Colonel on a mission of revenge, only to come face to face with a much more alarming situation.

Those looking for mindless escapism and all-out action from “War for the Planet of the Apes” will be sorely disappointed. It’s not a standard blockbuster with empty spectacle and T-shirt ready catchphrases. Instead, director Matt Reeves (“Dawn of the Planet of the Apes,” “Cloverfield“) has delivered a true war movie that doesn’t revel in the battles but instead focuses on the cost of violent engagement. Caesar is a haunted character in vengeance mode, realizing that he’s becoming consumed by hate just as his friend Koba (Toby Kebbell) was. The Colonel, however extreme and vile his actions may be, is coming from a place of moral certainty; he denounces Caesar’s actions as being “too emotional” but doesn’t recognize his own motivation of fear driving him onwards to destruction. The film does have some very well done battle sequences and action scenes, but they are not played for fist-bumping and cheering crowds; they’re merely an extension of the unfortunate circumstances and beliefs these two leaders hold.

That’s not to say that “War for the Planet of the Apes” isn’t an amazing looking film. The shots of apes on horseback riding through the snow should be a ridiculous visual, but instead it becomes a mournful stand-in for the winter of these apes’ despair. The CGI is also worth noting because it is beyond incredible; with the exception of a few shots here and there, it is a seamless realization of making the impractical seem utterly real. There are moments where audiences will have to remind themselves that what they are seeing is the result of ones and zeroes.

Underneath the CGI masks, though, lies the film’s greatest strength: the actors and their motion-capture performances. Serkis brings a sense of resigned regality to Caesar in his walk and speech, an ape that did not want this position but carries the burden nonetheless. Karin Konoval is impeccable as Maurice, the orangutan consiglieri that acts as Caesar’s moral compass and implores compassion when the apes discover a mute human girl (Amiah Miller) suddenly on her own. A perfect mesh of technology and craft, Maurice is an incredible character that says more with an expression or simple gesture than most actors could ever express with a lengthy monologue. Terry Notary as Rocket is a sad but noble figure, the tough grunt that has borne the losses of these battles but still serves the cause loyally, while series newcomer Steve Zahn as Bad Ape, a talking chimpanzee outside of Caesar’s fold, walks a fine line between comic relief and innocent outsider suddenly brought into the fray. Besides Miller, Harrelson is the only human with any real character development or investment, and he does well to bring a wounded Colonel Kurtz vibe to his fanatic leader who sees himself as the dividing line separating humanity from its imminent collapse.

“War for the Planet of the Apes” isn’t without its flaws, of course. The Bad Ape comedy often plays like Dobby in “Harry Potter” and can be too cute at times; the ending has a few plot holes and utilizes some convenient elements in order to reach its conclusion; and while it would be hard to say what should be cut, the film runs on a bit too long at two hours and 20 minutes. But these are minor issues.

“War is hell” is the cliché everyone has heard for many generations. With this latest sequel in the revamped “Planet of the Apes” series, Reeves sets out to prove what hell can look like. It can be mindless violence, compromised morals, or other atrocities But it all boils down to one main sin: someone has decided that another no longer has a right to live. Once that decision has been embraced, then a whole slew of darker issues will come spooling out alongside it. A movie about talking monkeys may not be where one expects to find such hard topics and heavy emotions, but audiences should be pleasantly surprised to be engaged in a meditation on these matters, all while marveling at the brave new world that has been sculpted by the actors and F/X crew. In the end, what defines humanity? It’s hard to say, but the answer may somehow lie within the frames of “War for the Planet of the Apes.”