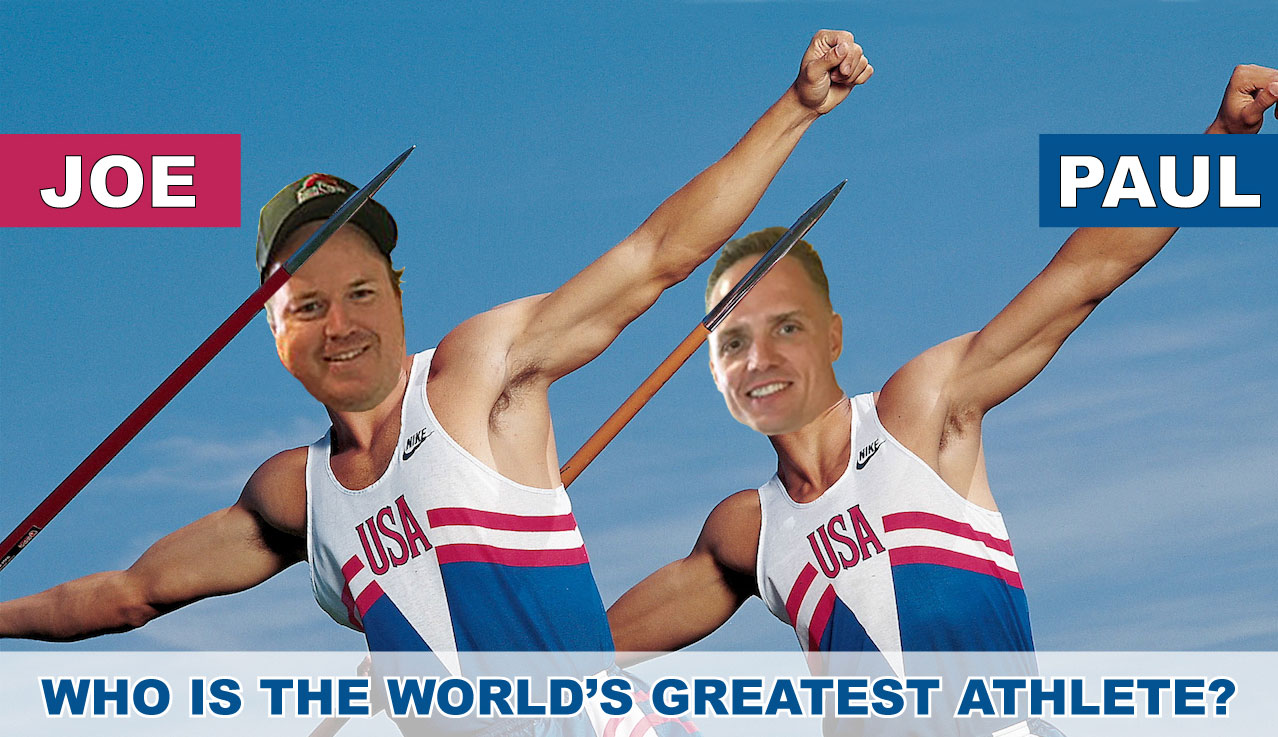 25 years ago, Dan and Dave squared off in the ultimate marketing campaign prior to the 1992 Olympics. It ended in adjunct failure, as one man won the bronze, while the other didn’t even qualify for the Olympics.

Media Elite member/Busted Coverage site owner Joe Kinsey and I went toe to toe at the Pizza Hut All-American Experience to see whose ball skills were superior. For one man, it ended well. For another, it was more like the Dan and Dave Reebok campaign.

The one thing sports journalists fear more than anything is to physically engage in the sports they love in front of other people. The only thing worse than that is engaging in those sports against other media members in front of some of the most iconic athletes in NCAA history.

During the recent College World Series in my hometown of Omaha, Nebraska, Pizza Hut assembled a group of all-time NCAA greats to serve as coaches for us media losers in the first ever Pizza Hut All-American Challenge.

Pizza Hut then invited writers like myself and Joe to compete against each other in mini challenges for ten NCAA sports, including a home run derby with World Series hero Joe Carter; a free throw contest with ESPN analyst and former Duke stud Jay Williams; and a football toss with Tom Osborne, the greatest college football coach in history.

At the end of the day, a champion was crowned. In a battle that was more Ike vs. Tina than Dan vs. Dave, Joe Kinsey and I locked horns to see who was more alpha, and this is what happened:

The event was hosted by Pizza Hut All-American contest winner Jason Zone Fisher. Here is the full list of coaches:

– As soon as I learned that former college basketball Player of the Year Jay Williams was going to be participating, I told anyone within earshot that I was going to “j up” Jay Williams. I challenged him to a one-on-one free throw contest, and in 60 seconds, I made 26 shots, while JW made 28. So close. Williams was a cool dude who was even goofier than me and had a great time.

– Joe Carter was hilarious. He was also happy and willing to trade barbs with anyone who wanted some. I asked him if a day goes by where he doesn’t get asked about his famous home run. He said no, and that he’s been proudly milking it for 24 years and there is no end in sight.

– There were so many cool things going on simultaneously that you could call once-in-a-lifetime opportunities, but my #1 was spending the day with Coach Osborne and talking to him several different times. It was surreal to look up and just see Tom Osborne standing there. As a guy who grew up in Nebraska, Osborne has been a living legend and an icon for my entire life. At several points during the day, I’d look over and see him standing by himself, and every time, I went over and talked to him.

Favorite coach to coach against? Barry Switzer. Best player he ever coached? He said there was no way to pick overall and that he’d have to go by position, and then quickly selected Tommie Frazier as QB and Dave Rimington as offensive lineman.

– I didn’t know who Courtney Thompson was because I’m not a big volleyball guy, but I do know we “set” a record with 102 consecutive volleys.

Hey @CourtLThompson remember that one time we did like 10,000 volleys in a row at the @PizzaHutAllAmerican #AllAmericanTrip in #Omaha? pic.twitter.com/2YzMRZg9FB

– Pro lacrosse player Paul Rabil is a beast. It would be impossible to stop that guy one-on-one if he wanted to steal the ball from you or just beat you up for fun. Super cool guy as well.

This was just a phenomenal event that Pizza Hut put together. To actually compete against pro athletes was a real thrill. Beating Joe Kinsey was the highlight of the event for me, and he hasn’t spoken to me since.