Trending
You are at:Home»Vices»Drink of the Week: The Moll Cocktail 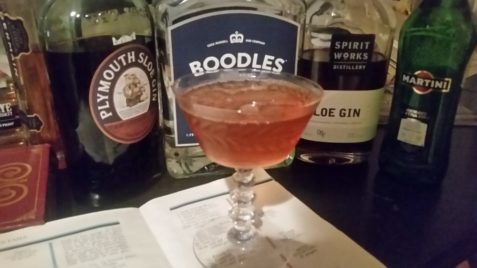 Today’s not particularly patriotic pre-Independence Day beverage is yet another unjustly obscure treat from the pages of Harry Craddock’s post-prohibition classic, “The Savoy Cocktail Book.” According to Erik Ellestad, who didn’t like this drink half as much I did, it actually predates that book by a few years and appeared in a more obscure 1925 tome published in England. Other than that, we know pretty much zip about where this drink comes from.

On the other hand, “Moll” can be short for “Molly.” Also, as us old movie buffs know so well, a “moll” is an old-timey gangster’s girlfriend, as in “gun moll.” Apparently in Australia and New Zealand it can also refer to a female sex worker or what my mother used to call “a woman of easy virtue.” Still, I think this is a drink that can be enjoyed by both women and men of all professions and proclivities.

In any case, Mr. Ellestad and I agree it’s a more low-key sibling beverage to a Negroni, I think it’s well worth the time of anyone who enjoys a cocktail that’s sweet and gently bitter. See what you think.

Combine the ingredients in a cocktail shaker (or a mixing glass), shake or stir, and strain into a chilled cocktail glass. Take a sip, and contemplate a new line of work for your favorite 1930’s gun moll.

And now it’s time to talk about brands. My dry gins for this were Boodle’s and Gordon’s. My dry vermouths were Martini and Dolin’s. All of them worked just fine and fairly interchangeably. However, there was a  difference between Plymouth Sloe Gin and a competing product from Spirit Works, an artisanal brand from Northern California.

I really have to give this one to our friends in Plymouth, England. The results when I used the British sloe gin were delightfully drinkable. It had an inviting sweetness that, while my in-house guinea pig found it reminiscent of apple juice, was anything but simplistic or cloying. Very, very sophisticated apple juice. The Spirit Works was, sadly, on the medicinal side on my first attempt with it. On other hand,  on it’s quite a decent liqueur on its own. I gave it a second chance and goosed up the sweetener by about 30%, it was just fine. On the other hand, if you use Plymouth’s, you can dispense with the sugar entirely and the drink is still quite acceptable for those who don’t mind a bit less sweet with their biter.