Trending
You are at:Home»Vices»Drink of the Week: The Special Prosecutor 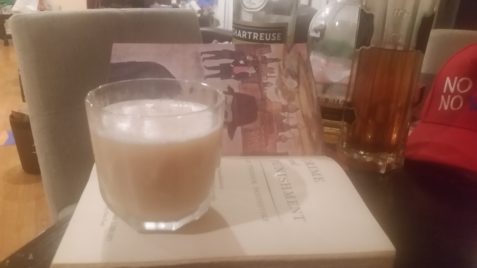 As part of my ongoing efforts to present the most politically relevant cocktail out there, a few weeks I Googled and brought forth the Prosecutor. It turned out to be perfectly lovely drink and is credited to Bostonian bartender Josey Packard and reportedly named by my one-time cocktailian muse and mentor, Rachel Maddow.

But that was then and this now, and I’ve made few alterations to create an amended beverage I’m dedicating to Robert Mueller, a reportedly honorable long-time Republican now widely maligned by his political tribe. As we wait to find out just how deeply our nation has been breached by a foreign power hostile to democracy and any notion of justice, fairness, or compassion, it’s a drink that I hope will steady your nerves and tantalize your taste-buds.

Combine all the ingredients, except the cherry, in a cocktail shaker without ice. Dry shake it (shake without ice) to emulsify the egg white. (This step may not be entirely necessary if you’re using packaged egg white, as I usually do.)

Shake again with ice and strain into a well chilled old fashioned glass. Wait a moment of two for a small, foamy cap to form, if you have the patience. Toast truth, justice, and the American Way. It’s not just for Superman any more!

There’s only one brand of Chartreuse (it’s made by these monks with a secret recipe,you see…), and it’s darn rare to find a competitor to St. Germain for elderflower liqueur, So, there wasn’t much room for messing about with my very sweet liqueurs. Fortunately, it’s obviously open season on rye whiskey. So, I tried this one with Woodford, Canadian Club 100% rye, and Rebel Yell Small Batch. It didn’t really matter that much as it’s really the flavors of the other ingredients that dominate.The whiskey provides an important base but I’m not sure if you’re choice of whiskey brand is in any way very important to the overall flavor of your Special Prosecutor.

Be forewarned. While the egg white I added should soften the tartness of the drink, this is still a very sweet and sour sort of drink. If sour is really your thing, though, you might try going with my very optional suggestion of orange bitters in addition to the Angostura, which can make for a fascinating and more sour drink which is suggested only for mature and hearty souls. Sort of like the news these days.